Today I'm going to take a break from the Paris Diaries and visit Barcelona (by special request.)

Everyone's heard of the friendly, fun-loving, fiesta-mad Spaniard so it is with great excitement that we boarded our plane for Barcelona, but as we found out in Paris, stereotyping can be dangerous and misleading. The Parisian, we found out to our relief, is not rude as everyone, including travel writers, would have us believe, but it was time to put the Spanish people to the test!

I guess our first mistake was to think that all Spanish people are alike.  Spain is made up of many distinct regions and Barcelona is the capital of the Catalonia region of Spain and thus home to the Catalans who do not like being called "Spanish".   They have a distinct culture and language and following the death of Franco, the region was granted political autonomy by the new democratic government.  Going by the Spanish stereotypes it would be safe to say that Barcelona is probably the least Spanish city in the country.

Sadly, the Catalans do not get very good press in the rest of Spain. The Spanish people see them as being fiercely nationalistic, mean and unfriendly.  When we asked a Catalan friend to explain why this may be so, he said that Catalans were a reserved people who took time to make friends and that reservedness is often mistaken for being unfriendly.  He seemed to think the Spanish habit of embracing anyone and everyone as a new best friend was tacky and superficial! :)

We weren't there long enough to make an accurate observation on the Catalan character but I will say they seemed very reserved - they would speak only when spoken to and at times seemed rather abrupt, but their dedication to style, looks, aesthetics and so on is admirable!    Barcelona is, without a doubt, a confident, progressive city - one that preserves its past proudly but which is also tirelessly self-inventive.  If you read its history and observe its architecture it's plain to see this is a region of proud, confident people who are not afraid to think outside the box.  I'm going to post pics of some of the buildings we saw around Barcelona and you can judge for yourselves.

The drive from the airport into the city was quite interesting with the thriving port on the right and the beautiful  Montjuic cemetery in the hills on the left.   The cemetery seemed to run for acres and acres (I read later that it was 57 acres of  cypress forest) and is a resting place for some of Barcelona's most elite citizens and also a fabulous place wherein to observe architecture of many different styles and periods.  However, what's challenging is the lack of information on this cemetery in most of the guide books.  Turns out the Catalans don't like to take tourists to this place because they consider cemeteries morbid and the idea that a cemetery can be a tourist attraction is rather distasteful to them.  Still, if one has the time, I think it might be a great place to visit for the art (the mausoleums are truly wonderful) and also for the beautiful sea views. Unfortunately I only saw fascinating glimpses of it from the taxi. 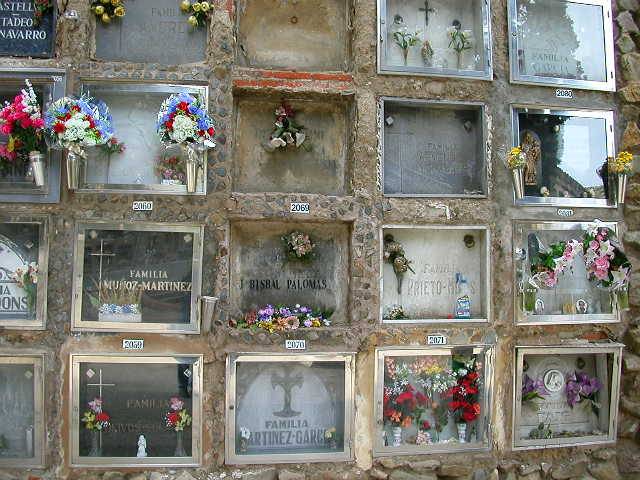 For more photos of the Montjuic Cemetery go here

Today Barcelona has a truly awesome waterfront, which wasn't always the case. Until a few years ago, the city had turned their backs on the water (literally) with all the development taking place away from the sea.  As a result, the beaches were grimy and areas of bad repute and the harbours were home to cargo and container trade only. 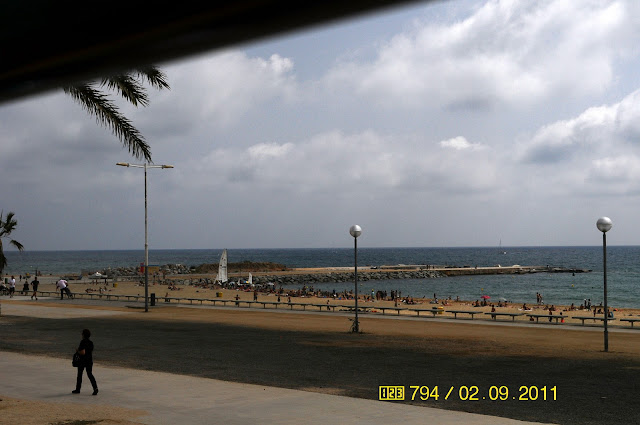 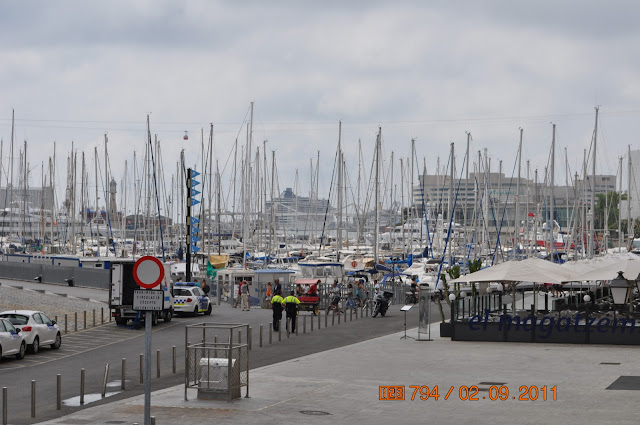 Over the past two decades dramatic changes have taken place along the waterfront.  Cargo ships have been moved to the south of the city and old dockyards have been given facelifts and now serve as promenades or parks.  Beaches have been cleaned up and landscaped. 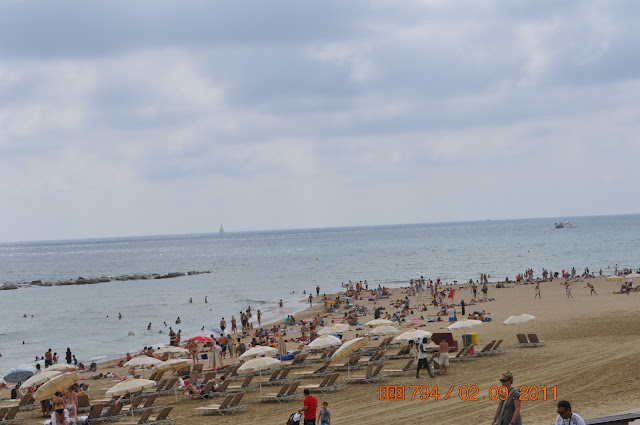 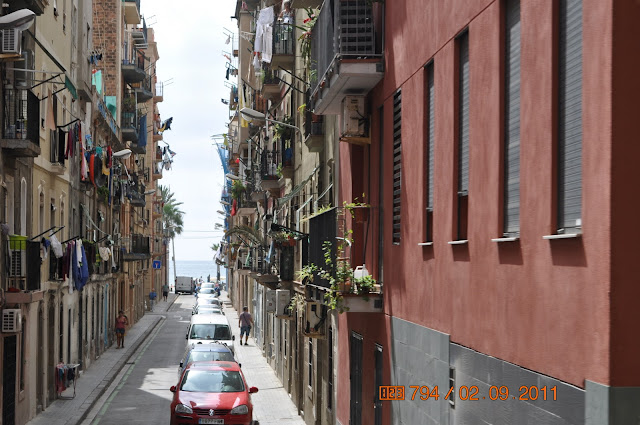 Barceloneta was once a scrappy fisherman's village but it is now furnished with landscaped beaches, boardwalks, terraced outdoor cafes specializing in seafood, fountains and so on. I took this picture just to get a glimpse of the original Barceloneta. 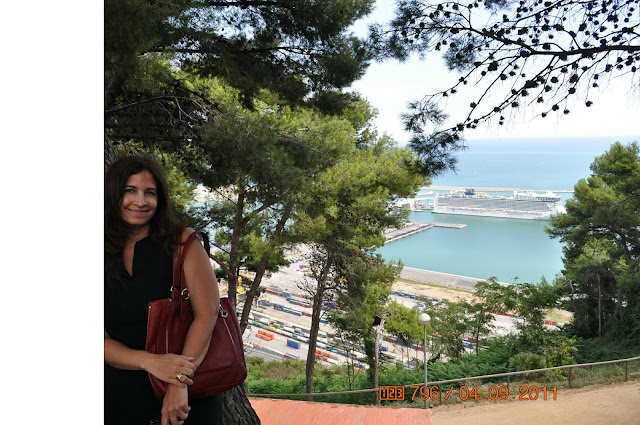 Standing on a hill in Montjuic with the harbour behind me.  Cruise ships are a common sight at the harbour here. 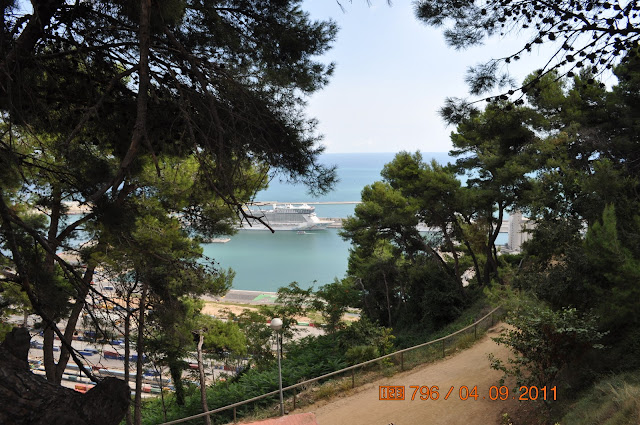 Another view of the harbour 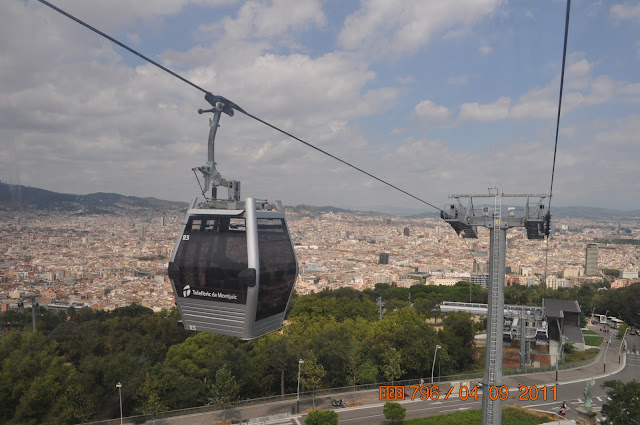 One of the nicest things to do in Barcelona is to grab a funicular from Montjuic and take an aerial tour of the city.
Posted by Lotus Reads at 8:25 a.m.

Looks like you are really enjoying yourself. I've always wanted to visit Spain. I assume it's breaktaking. Please make sure to make a list of must see places.

Hey Lena and welcome, very nice of you to leave me a comment, thank you! On this visit to Spain we only had enough time to visit Barcelona. We hope to go back some day and visit Madrid and the Andalucia regions. I will continue to post more pictures of Barcelona, do stay tuned.

Enjoying the pictures and the writeup.Makes one want to take the next flight to Barcelona.I especially liked the photo of the alley in Barceloneta with a single line of cars and clothes drying outside the windows.

Thank you for sharing these. Yes Spain is much more diverse than most people realize. I know that now thanks to a former colleague of mine who was Basque.
Enjoyed the pics.
Any comments about the food? A has visited Madrid and she had the time of her life, she loved the food.
Also she had a local friend so maybe that helped.
Spain has been going thru a tough time economically, did you get a feel for any of that while in Barcelona?

Brought it all back to me. I think I'll take my daughter over next time. Went with hubby and had a very good time. Must say I did not see the cemetery. Now I know why. Aerial tour of the city is great too.
The Catalans have their own proud culture. Scots often cited their struggle to get devolved power when fighting for it.
Great pics Angie.

Really loved reading your take on Barcelona and the Spanish culture , I have been there a couple of times myself and realized I just love Spain ! Did you by any chance see the flamenco being performed? Also the food in Spain is to die for - the paella , tapas and their chocolate and churro combination is out of this world. Apparently, the Spaniards have this as breakfast at 7 in the morning after a crazy night of dancing and clubbing. Great photos Angie !!

Really loved reading your take on Barcelona and the Spanish culture , I have been there a couple of times myself and realized I just love Spain ! Did you by any chance see the flamenco being performed? Also the food in Spain is to die for - the paella , tapas and their chocolate and churro combination is out of this world. Apparently, the Spaniards have this as breakfast at 7 in the morning after a crazy night of dancing and clubbing. Great photos Angie !!

Oh my gosh....your Barcelona blog was magnificent! The pics, the commentary....ohhh, you make me wanna go there! I have some friends traveling to Barcelona in December - must share this with this with them. Well done, Angie!

I love all your pictures. I started a cruise in Barcelona a number of years ago, and our evening before departure was a wonderful time. We walked the Romblas and saw a Gaudi house. It was wonderful. I would have loved to ride that funicular and seen the tour from the air.

Barcelona is simply gorgeous. Love the harbor. The Spanish culture is fascinating! Would love to take my boys there since they both also speak Spanish so fluently. Just as the other readers have asked, what was your take on the food? I am told everything there is all pork. Would be a problem for me eh?

And can I please say I just loooove your bag!!

Dips, you really MUST try to make time for Barcelona. All of Europe has great architecture but I don't know if anything compares with Barcelona in the avant-garde or modernisme genres!

Hey Sanj! Will have to do a separate post on the food. The food isn't as interesting as that in Paris, but it's still merits a separate post, especially the cava! ;-)

Couldn't really tell how the economic situation was hurting Spain as we didn't see any beggars on the road, and nor did we get to hang out with too many locals. The ones we spoke to said Barcelona wasn't as affected as the rest of Spain as it's the hub of Spain's commerce activity and I'll have to take their word for it!

Leela, I always learn from you and yes, the Catalans have an amazing history. They are such a resilient people and have proven that they have the strength and fortitude to overcome most anything. General Franco made their lives miserable, but if anything, what he gave them was a gift because they took all that hardship and used it to become a formidable force. We can all learn from them. The Basques are quite different...no less formidable...but a very different people.

Hey Anon! Thank you so much for your comment! No, sadly I didn't catch a flamenco performance....I would have loved to but it's not a Catalonian tradition so I thought I would save it for when we visit Andalucia. Oh my goodness, yes, the TAPAS, we went quite loco over them! Chanced upon this wonderful place called "Tapeo"...they had the most unusual tapas...you must visit on your next trip to Barcelona!

Hi Raidergirl! Yes, we saw lots of cruise ships docked at the harbour. Where else did your cruise take you?

Hey Shirin, yes, do take your boys there they will love it! In Barcelona, Catalan, not Spanish, is the official language but thankfully all the signs are in both languages and most of the people speak Spanish, so yes, the boys will get loads of practice. Don't worry about the food - although jambon is everywhere....you can get lots of dishes with beans, chicken, ox tail etc. I am so happy to see you here and thank you for the lovely comments!