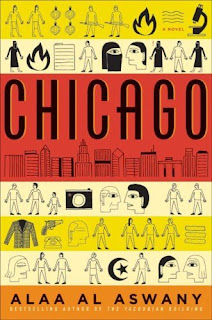 Before launching into a note of praise for Egyptian author Alaa Al Aswany's second 'novel' "Chicago" (translated into English by Farouk Abdel Wahab), permit me to quote some witnesses for the prosecution.

"Al Aswany seems to see the novelist's role as being close to that of a schoolteacher. He writes, in the style of a Wikipedia entry by Howard Zinn or Noam Chomsky, about the wretched fates of the Native American peoples who once flourished in Chicago." ~ Sunday Telegraph

"The cast of characters is a large one, and Chicago weaves together their various stories - too many of them, perhaps... the American characters are scarcely believable, being thinly drawn caricatures who speak in a wooden manner, representing competing points of view and nothing more" ~ Guardian, UK.

Aswany’s storytelling is also marked by its sensuality. From the self-denying student who allows himself an hour of recreation to watch wrestling and pornography to the lapsed poet whose voice and wholeness of self is restored by sex, everywhere we see the animal self lurking beneath the trained, dressed, and tutored body-in-the-world, aching to unsheath itself ~ The Scotsman

Al Aswany, a dentist by profession, is probably one of the most popular writers in the the Middle East today. He shot to fame with his wonderful first book titled "The Yacoubian Building" about a group of families living in this one apartment block in the center of Egypt and their intersecting lives served as a microcosm of Egyptian society. He has attempted something similar with his second book 'Chicago" but instead of an apartment block he has chosen the venue to be the University of Illinois and while most of the cast are Egyptian expats there are also some Americans.

Now, in Al Aswany's defence I have to say that I didn't consider his writing didactic or schoolteacher-like in the least. True, he seems wont to give us the history of Chicago, but it's done in a very readable manner and I like to look at it as his tribute to the city where he studied dentistry for two years.

I do agree with the critics when they say that his fleshing out of the American characters in the novel was rather weak, but it doesn't surprise me. Al Aswany is Egyptian and he would know much more about the Egyptian psyche than that of the American one, also, he was a student in the US in the late '80's and it could be that some of his impressions of America and its people are quite dated, still, that's no excuse for weak, unbelievable characters.

One of his goals here in "Chicago" is to provide a window into how Egyptians think and act among themselves when they are away from the Motherland as well as the Arab experience in America and to that end I think he achieves what he sets out to do. The other goal of the novel seems to be to expose the regime in Egypt for what it is - corrupt, biased, oppressive and brutal - and Al Aswany does that effectively by using his characters to offer political commentary. One of the most fascinating passages in the novel comes when an Egyptian Muslim sits down to discuss politics with an Egyptian Coptic Christian. What is revealed is something I didn't know: the Copts or the original Egyptians as they are known are highly discriminated against in Egypt

About the use of sex and sensuality in the novel...yes...there is a lot of that...but I don't think it's out of place. You see, in Egypt young men and women are not allowed to have sex until they are married and pornography is banned...but in America, they are free to have it when they want, with whomsoever they want and even buy sex toys if they so desire. Al Aswany, I think, uses sex as a metaphor for freedom...

In reading this book I have come to the conclusion that this book was written mainly for an Egyptian audience. Al Aswany was showing them what life is like for Egyptians that immigrate to America, however, it is captivating stuff for an American audience as well because we get to see ourselves through the eyes of Egyptian immigrants.

The book seeks not only to entertain (although it does an excellent job of that) but seeks to get the reader to ponder the role of an immigrant. Does he or she owe it to the adopted country to sever ties with the old country and be totally loyal to this new one? Or can the immigrant successfully juggle being a hybrid of both countries? As an immigrant myself, I personally think that immigration is always a struggle and one is forever having to make choices...hopefully we're making more right choices than wrong ones.
Posted by Lotus Reads at 7:34 p.m. 30 comments:

The Girl From Foreign: A Search for Shipwrecked Ancestors, Forgotten Histories and a Sense of Home by Sadia Shepard 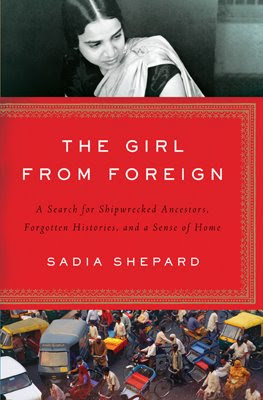 When I was growing up in India I was always referred to as the "Girl From Foreign". This could have been for two reasons, one, I was born in the UK and do have Scottish ancestry, but more likely I was referred to in that way because I was paler than most Indians and had (still have, lol) blue eyes which again is not a common feature amongst us Indians. (In India people often refer to places outside of India as 'it's in foreign' or 'she's from foreign'," 'foreign' simply denotes something or somewhere unfamiliar.) So when I spied Sadia Shepard's book "Girl From Foreign", the title seemed to be calling my name and I knew I just had to read it!

Sadia Shepard got that moniker when she traveled to India from the US in search of her maternal grandmother's Indian-Jewish ancestry. You see, growing up Sadia always believed her grandmother Rahat was a Muslim. She didn't know that she was originally Jewish (from India) and had converted to Islam to become her Muslim-Pakistani husband's third wife (Sadia's grandfather) and that her birth name was Rachel Jacobs. When Sadia accidentally found out one day about her grandmother's birth religion, it complicated her own...she was now the product of a Jewish-Indian grandmother, a Pakistani-Muslim mother and an American-Christian father. So, who was she really? This is a conundrum many kids from inter-religious marriages face: Who are we?

To avoid this many parents decide before hand what religion their child is going to follow. While this may result in fewer headaches when it comes to choosing a school, a name etc. is it really fair to the child to pick out a religion for him/her? Shouldn't the child be exposed to both religions and then allowed to choose one when they are able to make an informed decision? For that matter, if a person is born into two religious traditions is it imperative to pick one over the other? Is there that much conflict between religions that we're unable to embrace more than one?
Anyway, to come back to the book, as Sadia's grandmother lay on her deathbed she made Sadia promise to learn more about her family heritage and therein lay the genesis of Sadia's trip to India to find out more about the Bene Israeli community of Indian Jews (thought to be one of the lost tribes that fled Israel two thousand years ago and landed, shipwrecked, on the shores of India.)

Although this is very much Sadia's grandmother's story( a love story at that), it is also a book about heritage and if and how it shapes you as a person. This made fascinating reading for me because, like Sadia, I have mixed ancestry, although, unlike her, I don't feel compelled to choose one or the other, for I believe it is possible to belong to more than one place and to be part of more than one culture. However, I, too, have struggled with identity, often feeling like a foreigner in my own country because of how I am perceived. However, as the world becomes one global village, hyphenated identities and mixed religious traditions are going to be more the norm than the anomaly.

Since the Mumbai terrorist attacks which carries the dubious distinction of being the first one in which Jews have ever been attacked on Indian soil, people cannot read enough about Bombay's Jews. This book will help the reader understand who they are, where they come from and where their future might lie.

To gain more insights into the lives of India's Baghdadi Jews please tune in to this segment of Kamla Bhatt's highly informative show,"The Kamla Bhatt Show"
Posted by Lotus Reads at 9:18 a.m. 47 comments: