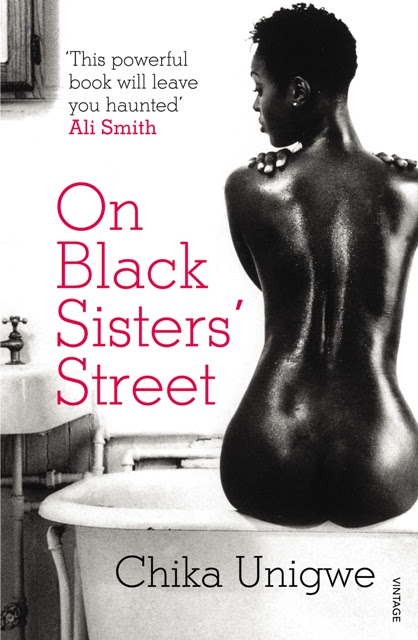 That Nigeria is a failed state is no longer in question.  However, a major consequence of that is the organized exodus of Nigerian girls and women to Western Europe, where they are promised exciting jobs but end up trapped in brothels run by their own nationals - Nigerian “Madams”.

"Black Sisters' Street" by Chika Unigwe is a fictional account of four such women - Sisi, Efe, Ama and Joyce - each of whom left Nigeria for Belgium, with dreams of a better tomorrow, only to find themselves working as prostitutes in the red light district of Antwerp, or "Black Sisters' Street" named for the inordinately large number of African woman that work the street.  To tell you that none of the four went to Belgium voluntarily or that they didn't expect to be prostitutes would be to mislead the reader...however...what makes one angry is the fact that these girls felt it necessary to leave their homes, parents (in some cases, children) and enter this sordid industry only because they could barely make ends meet in their home country.  It is sad these girls had to take up a job that stripped them of all self-respect just so that they could be respected back home in Nigeria.

The character sketches of the four girls are detailed and intimate and yet, at the end of the book, none of them feels like a 'best friend', for despite the tiny details - how they dressed, their family lives, their thoughts, dreams and so on - one really doesn't get to "know" them well. For that matter, even though the girls live togther, they are strangers even to each other until one tragic event brings them together.

Unigwe's prose is clear and calm - although some terrible things take place in the book, the reader doesn't feel weighed down by it.  Unigwe is also skilled at introducing into the narrative issues that are typical to Nigerian society like polygamy,sexism, belief in superstitions, tribal divisions and so on, using just a single reference or a passing comment, leaving the reader with a fleeting but precious sort of cultural snapshot.

I also love her descriptions of Nigeria - from the chewing-gum pink walls of the sitting room in Ama's house (and yes, I know they have them, I've seen them in just about every Nigerian house in a Nollywood movie!) to the streets of Lagos in Joyce's story- her writing with its rich detail, truly entertains and informs.

"Lagos streets were rutted,gutted and near impassable,yet they were jam-packed with cars: huge air-conditioned jeeps driving tail to tail with disintigrating jalopies whose fault exhaust pipes sentout clods of dark smoke making the air so thick with pollution that a constant mist hung over the city and the bit of sky that one could see was sullied with dirt."

We get to know some of the girls better than the others.  The story mostly revolves around Sisi, a college graduate who was unable to find a job in Nigeria because she didn't have the right "connections", however, it is Joyce's story that moved me the most, perhaps because it was the saddest and also, of the four girls, she was the only one tricked into going to Antwerp.   To tell you more would be to give much of the story away and I certainly don't want to do that.

When Chika Unigwe was asked why she wanted to write about Nigerian prosititutes in Antwerp, she had this to say:


Curiosity. The first time I saw the girls in lingerie behind their windows, I was stunned.  Coming from Nigeria where prostitution is very much underground, it was a cultural shock on a massive scale. I had never seen anything like it before. Then when I was told that a great majority of the African prostitutes in Antwerp were Nigerian girls from Benin City, I knew I had to write about it. The statistics are mind boggling. There is a new crop of middle class families cropping up in Benin City, mostly headed by women whose daughters are in Europe


I'm so glad she did (write about it), the novel does much to make us pay attention to that society that we do everything to ignore, also, it was interesting to see Europe - the destination for so many people's hopes and dreams - through the eyes of these four Nigerian girls. I appreciated that while Unigwe reveals to us that three of the girls did indeed travel to Antwerp while fully aware of what the job entailed, the background stories ensure we don't blame them...it's easy to see how girls like Ama, Sisi and Ete are pressured into taking up these jobs, if anything. it makes you angry at a society that sits back and allows these girls to sacrifice their bodies in order to put meals on the table.

Lastly, but not importantly, I noticed a few digs against Ghanaians in the book...would someone be able to tell me if there is friendly rivalry between the citizens of these two countries?


"Ama spied two Ghanaian guests going back for a second helping rice and smirked to Sisi that surely, surely Nigerians cooked better, made tastier fried rice than Ghanaians.  (People who threw whole tomatoes in sauces couldn't really cook, could they?) And both women agreed that Ghanaians were just wannabe Nigerians."

An award-winning short story writer, Chika Unigwe, 34, was born in Enugu, Nigeria, and now lives in Belgium with her husband and four children.
Posted by Lotus Reads at 2:44 p.m. 37 comments:

Hello fellow-readers and bloggers!
Just signed up for the

So excited!
Please click on the button to read more!
Posted by Lotus Reads at 7:27 a.m. 11 comments: