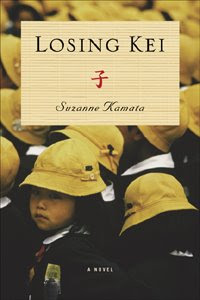 
This month I find myself reading two books with a similar theme - not by design, just mere coincidence. The theme? Child custody.

One, "Losing Kei", has been written by writer and fellow blogger Suzanne Kamata, whose blog "Gaijin Mama" I have been reading for a while now. Not only does it give me great insights to parenting but also shows me a Japan that one doesn't always read about in books.

"Losing Kei" is an easy-to-read contemporary story (fiction) about an American landscape artist (Jill Parker) who travels to Japan to get over a heart break. Whilst there she meets and marries a traditional Japanese man (Kukume).

Kamata, an American married to a Japanese man, does an excellent job showing the reader how when two very different cultures meet there could be clashes, especially in the area of marriage, inlaws, bringing up the children and so on.

The Japanese tend to be a highly homogenized society and very often will be wary with foreigners. Jill's inlaws did not approve their son's choice of a bride but accepted it because it pleased their son. Jill was expected to live in her inlaws' home and was also expected to play the role of a subservient wife and eager-to-please daughter-in-law, something that was totally alien to her independent upbringing. Cracks soon formed in the relationship forcing Jill to ask for a divorce. What she hadn't bargained on however, was that she would have to give up custody of Kei due to Japanese custody laws which state that a foreigner has no rights to custody! Indeed, even when both parents are Japanese it is not uncommon for children of divorced parents to be told one of their parents is dead - case in point, former PM Koizumi. When he divorced his pregnant wife he retained custody of his eldest son and the wife was never allowed to see or meet him. Anyway, so Jill sees no way out but to arrange to smuggle Kei out of the country....does she have the guts to do it? Will she get away with it? You'll have to read the book to find out! 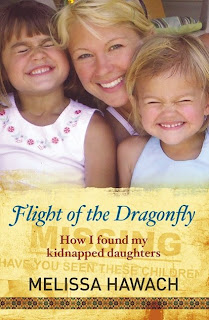 "Flight of the Dragonfly" is the true story of how Canadian mom Melissa Hawach fought to get her children (Hannah,5 and Cedar,3) back after they had been abducted by her Lebanese-Australian husband, Joe Hawach and taken to Lebanon during the height of the Hezbollah-Israeli war.

I remember reading about this incident (it was all over the papers) in 2006 and I thought Melissa's story would make a good book (especially because the way she went about bringing the girls back home was particularly dangerous and had a potentially nail-biting ending) but sadly, something about the tone of the book fell flat for me.

Try as I might, I just could not evoke feelings of anxiety for Melissa, nor did I find myself feeling any sort of tension through the proceedings. Even worse, despite the awful thing that happened to her, she didn't quite cut a sympathetic character in my eyes. Also, the book bounced about quite a bit taking us from Sydney in Australia to Calgary in Canada back to Sydney, to Lebanon and so on, in no particular order. Perhaps my ambiguity had to do with the writing which I am told was heavily edited for possible libel or perhaps it had to do with the fact that Hawach simply narrates the story..it's just details upon more details. What the reader is going to want and doesn't receive, are discussions of feelings and emotions..

No real explanation is given for why Joe Hawach felt he had to abduct his children despite having visitation rights...it certainly made me think about parental abduction and how and why it happens. It saddened me to read that the mercenaries hired by Melissa to abduct the kids from Lebanon were family men themselves and while she managed to return to Canada safe and sound, the two men were arrested in Sydney and kept in jail for three months! What I did like about her however, is that she doesn't seem embittered by what she's gone through. She allows they girls to speak to their father once a week on webcam and even entertains the thought of taking them to visit him in Australia some day.