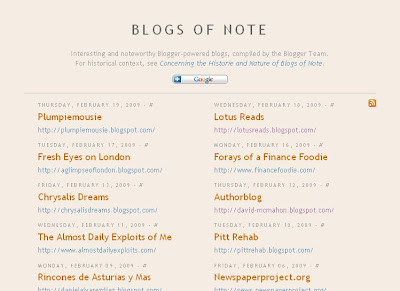 I was thrilled to discover (thanks, Rebecca) that Blogger chose my blog as a "Blog of Note" on Feb18th (yesterday).

Also, happy to see my friend David MacMahon's blog was nominated as well.

**an update** Just want to say a HUGE thank you to all of you who stopped by to leave your wishes. I am overwhelmed at the wonderful response and attention my rather humble blog has been receiving...thank you so very much! My whole aim in starting this blog was to spread the love of reading and to get involved with a reading community. I welcome all of you to my blog, please visit often. Thank you!

Smoke and Mirrors by Pallavi Aiyar, "Lost on Planet China" by J Maarten Proost and The Corpse Walker by Liao Yiwu 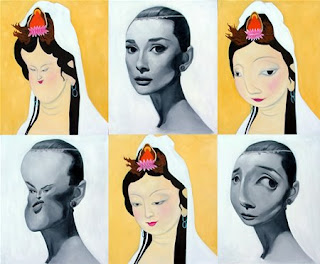 Whilst on vacation (August 2008) this time I noticed quite a few books that discussed Modern China (this rush of books on China obviously had a lot to do with the Beijing Olympics) . I couldn't resist picking up a few, which I am glad to showcase here.


First, there's Pallavi Aiyar's "Smoke and Mirrors: An Experience of China", and to my mind the best of the lot. Her book discusses China and and its meteoric rise to economic stardom but mostly from an Indian perspective. You don't necessarily have to be a reader of Indian studies to enjoy the book...part memoir of her time in China, part travelogue and part political studies, Aiyar's book paints a vibrant and informative picture of the new China which any China watcher would be glad to read. 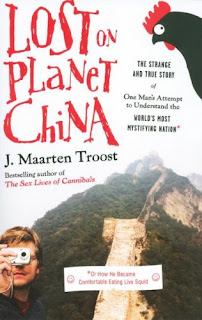 Then there is J. Maaretn Troost's rollicking travelogue titled "Lost on Planet China" in which he gamely and hilariously charts out his adventures in China. Many of you may know Troost from his previous (equally funny) travel books,"Sex Lives of Cannibals: Adrift in the Equatorial Pacific," and "Getting Stoned With Savages: A Trip Through the Islands of Fiji and Vanuatu".

My hat is off to anyone who would attempt to write a travel book on China...it is an onerous task because of China's vastness and long history. Still, Troost has done a tremendous job of it. In Lost on Lonely Planet he not only describes some of the well-known cities and sights: The Great Wall, Shanghai's "Bund Street", the Hippie trail in Dali, the casinos of Macau but also some of the lesser-known attractions like Ghuangzu's "Qingping Market" (a Noah's Ark of the exotic and the bizarre also the place where SARS had its genesis) along some out-of-the-way excursions to Lhasa and the Three Gorges on the Yangtzee River.

Now while Troost may be laugh-out-loud funny a lot of the time, he also brings some important issues into question, like China's terribly polluted air and water (a traffic policeman in Guangzhou has a life expectancy of only 43 years), its totalitarian state with government spies everywhere (especially Tibet) and the effects of globalization. But whether Troost is making you laugh or making you ponder, you, as a reader, will always benefit from his curiosity and sense of adventure. I invite to go to China with him, you'll enjoy yourself!


Ok, so both Aiyar and Troost guide the reader through a China that is a modern industrial giant, with teeming cities and towering skyscrapers but somehow, reading all about the new China resulted in my becoming rather nostalgic for the old one. If China becomes this big economic power will it be in danger of losing its old buildings, traditions, professions etc? More importantly, are we going to be so dazzled by China's golden future that we forget and forgive its past, especially the brutal period of the communist rule?

Fortunately, "The Corpse Walker: Real-Life Stories. China from the Bottom-up" by Liao Yiwu sees to it that we do not. "The Corpse Walker" is the noble effort by Chinese poet Liao Yiwu to document the lives of those people from the edges of Chinese society and for who the ‘new’ China—the China of economic growth and globalization—is no more beneficial than the old.” 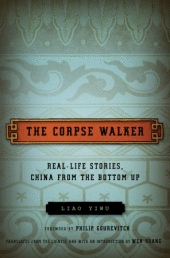 The Communist Movement was supposed to have created an egalitarian society free of beggars, triad gangsters, prostitutes etc. but as you will read, this didn't happen. Every year sees tens of thousands of local uprisings in China, most of which are extinguished by the army and unreported by the press. The rioters are usually peasants who are amongst the most deprived and marginalized in Chinese society. Liao Yiwu has made it his business to give these peasants and other repressed people a voice. In "The Corpse Walker" he conducts a series of interviews with 27 people from various marginalized groups.

I can't think of anyone better suited to highlight the lives of these social pariahs. After writing a poem criticizing the Chinese government's handling of Tiananmen Square episode he was imprisoned for four years. After he was released he went about collecting testimonies of other people who, like him, were denied their right to speak out. His subjects include a grave robber, a street musician, a former Red Guard, a leper, a professional mourner and so on. He has a taste for the exotic and the grotesque and some of the subject matter will truly surprise and/or horrify you, but you will come away marveling at the resilience of some of these Chinese people despite the cruelty the authorities have heaped on them.

If you don't have time for all 27 histories, atleast make time for:

"The Corpse Walkers" (an old tradition practiced in China...

'The Falung Gong Practitioner" (the Chinese govt. declared it an evil cult in 1999 after they dared to protest in Beijing against unfair treatment)

"The Tiananmen Father" (a heartwrenching story about a family whose son was killed by a soldier's bullet at Tiananmen Square for daring to ask the soldiers to stop using force against the unarmed students.

The Paris Review has periodically carried some of Yiwu's stories

The Toilet Manager
The Peasant Emperor
The Survivor

The value of Yiwu's book is its contribution to a people’s history of China, where such histories are neither acknowledged nor dignified.

Two other books on the testimonies of ordinary Chinese people to look for are:

Out of Mao's Shadow:The Struggle for the Soul of a New China by Philip P. Pan

Liao was at home in Sichuan when the earthquake hit on May 12. He was shaken but not hurt. Soon he was wandering through the damaged towns where 69,000 people died, looking for evocative stories that reveal the peculiar and intimate truths of oral history. He plans to make them the subject of his next book.

***Sorry, but the comments feature is closed on this one, thanks for understanding**
Posted by Lotus Reads at 3:40 p.m.