Picador, March 2010
"Hotel Iris" by Yoko Ogawa is one of those novels you want to read with one eye closed.  In other words, the subject matter can be bizarre and grotesque and at the same time, you cannot stop reading because the story, the plot and the mood is so compelling, it draws you in almost against your will.

Our protagonist is 17-year old Mari who works in her mom's rundown hotel, "Hotel Iris" at a seaside resort in Japan.  (Well, atleast I think it's Japan but because the details of where the place is is so sparse it could be any seaside town, anywhere).

The novel opens on the cusp of Japan's hottest summer and also the busiest time of the year for Hotel Iris.  One evening as Mari tends to the front desk a commotion breaks out in Room 202 and soon she sees a "lady of the night" bounding down the steps in fear and anger and yelling out to the occupant in the room who it seems was intent on having rough sex with her.  Mari catches a quick glimpse of  the middle-aged customer as he leaves the room and throws two bills on the reception desk on his way out.

Some days later Mari sees him again and to her great surprise she realizes he is not the commanding figure she thought he was when she saw him in the hotel that night, instead she sees he is a middleaged- to- old man (almost 50-years older than her), about her height and frail-looking.  She has this urge to follow him for not only is she curious about him, but on page 11 she tells us her thoughts upon hearing the customer shouting back at the prostitute in the hotel "I was confused and afraid, and yet somewhere deep inside I was praying that voice would someday give me an order, too."

You know how they say, be careful what you wish for?  Well, Mari's sinister wish came true.  She meets the gentlemen (we are never told his name) in town again and finds out  he is a translator of Russian pamphlets, medical documents and administrative papers and in his spare time he is translating a Russian novel whose heroine is named Marie.  The translator lives in an old isolated house on an island which is only accessible by boat and it there in his house that these sado-masochistic trysts between him and Marie take place. Note the restraint in Ogawa's writing with the prose being refined yet penetrating:


"He had undressed me with great skill, his movements no less elegant for all their violence. Indeed, the more he shamed me, the more refined he became — like a perfumer plucking the petals from a rose, a jeweler prying open an oyster for its pearl."
The narrator describes himself as a widower; a rumor in town says he murdered his late wife. Mari does consider the thought that the narrator might be a murderer but the thought seems to excite her as much as scare her.

Although the reader might wish to feel sorry for Mari, it is a little difficult to do so given that she really seems to enjoy these torture sessions. One is not entirely sure why though. Could it be that it adds some excitement to her otherwise dull life? Or is it because in some twisted way these interactions with the narrator make her feel loved  (something her mother seems incapable of doing?), or, does Mari feel this is what is due her because of her damaged sense of self?  Really not sure what her trigger is.  Perhaps it is none of the above and that she enjoys the pain purely for its physical sensation, after all, isn't pain supposed to release certain neurotransmitters, including natural painkillers like endogenous morphine?

Adding colour to this mouldy seaside resort story are a motley crew: Mari's mother (again nameless) whom I have already mentioned ( a thoroughly dislikable woman who works Mari like a slave without a single day off); a kleptomaniac maid; a blind guest and the translator's nephew who is tongueless and a student of architecture who Mari finds rather interesting.

This book was written in 1996 but was only recently translated from the Japanese into English by Stephen Snyder. Ogawa has won accolades in Japan for the two novels she wrote previous to this one, "The Housekeeper and The Professor" and "The Diving Pool". Ogawa's writing style is sparse and minimalistic, but she is so good at setting moods, providing a sense of place and manipulating a readers' senses with her spare words, that I almost want to say she is the writer equivalent of Alfred Hitchcock. Also, for all the torture, lust and obsessive behaviour that takes place between the pages of this book, the narrative tone comes across as being rather detached, even clinical, but because it is in sharp contrast to the behaviors it actually makes the read that much more interesting.  This is a bleak novel but exquisitely imagined.  I cannot wait to read Ogawa's previous two books.
Posted by Lotus Reads at 7:51 p.m. 18 comments:

July 30th marks the official 75th anniversary date for the launch of Penguin Books, and Penguin is going all out to celebrate this summer. For a list of festivities,stories and events, go here.

Penguin’s founder Allen Lane started the paperback revolution with that little flippant but dignified Penguin (his secretary came up with the name and he sent another colleague off to the zoo to make sketches). One year later, 3 million Penguin paperbacks had been sold. Today, the  Penguin imprint alone has over 4000 books in print. To learn more about their history, see here and here.


Penguin has generously offered me the chance to give some lucky reader a Penguin book to commemorate their 75th anniversary.  I was asked to pick two titles from a list of 75. One was for me to keep (thank you Penguin) and the other is to give away.


Choosing one title out of seventy-five choices was no easy feat indeed, but after a little deliberation I decided to go with "Tortilla Curtain" by T.C. Boyle.

I read "Tortilla Curtain" many years ago and the plight, misery and yet courage of the Mexican couple- protagonist, Candido and America, never ever left me.  Today with Arizona's  immigration bill on everyone's tongues I thought this would be a very topical read.  If you're on the fence regarding this bill, believe me, this book is going to help you make your mind up, one way or another.


I include a synopsis of the book courtesy the publishers:

Topanga Canyon is home to two couples on a collision course. Los Angeles liberals Delaney and Kyra Mossbacher lead an ordered sushi-and-recycling existence in a newly gated hilltop community: he a sensitive nature writer, she an obsessive realtor. Mexican illegals Candido and America Rincon desperately cling to their vision of the American Dream as they fight off starvation in a makeshift camp deep in the ravine. And from the moment a freak accident brings Candido and Delaney into intimate contact, these four and their opposing worlds gradually intersect in what becomes a tragicomedy of error and misunderstanding


And here is a slightly more detailed run down of the book from Wikipedia.

And one from the Penguin Reading Guide.


In order to win a copy simply write a comment telling me you would like to be included in the draw.  The draw will take place on 02 August and you will be notified here, so please check this space.  Thanks!


And the winner is, "Sai Speak"


Congrats Sai, I will be e-mailing your for your address!!!  Hope you like the book!

Stone in a Landslide by Maria Barbal 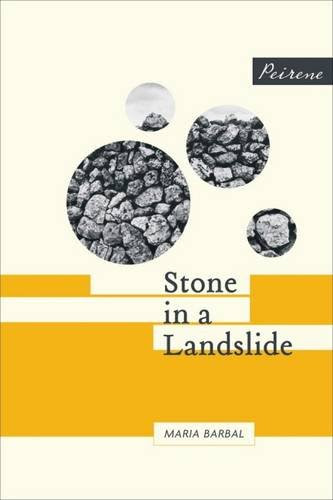 Publication:   Peirene Press (2010), Paperback, 108 pages
ISBN: 9780956284013
Today I place in your cupped hands a gem of a book titled "Stone in a Landslide" by renowned Catalan writer, Maria Barbal.   The book, which was originally written in Catalan and translated into English by Laura McGoughlin and Paul Mitchell, narrates the story of a 13-year old Catalan girl, Conxa, who is sent to live with her childless aunt Tia in a different village on the Catalan Pyrenees at the beginning of the last century.

The story is not extraordinary, in that, she traces her life at her aunt's house (her aunt and uncle are farmers and although they are comfortably off, the work is physically grueling), her first love Jaume who she later marries, her children, the onset of Spain's civil war and how they were taken prisoners for a while for Jaume's involvement with the Communist revolutionaries and finally her twilight years as a grandmother in Barcelona, hardly needed, rarely listened to.

So like I said, the story itself is not all that different or remarkable, what puts this book at the top of my reading list (and you will thank me if you place it at the top of yours too) is the narrator herself...her voice..her ability to tell a tale and to mark a passage of time with so much credibility, muted emotion, an enviable conciseness (the novel is only 126 pages) and a surprising gentleness and yet, as you read, the story and her emotions are so fiercely felt, it leaves you deeply affected.

Also, Barbal writes the way most of us would write should we look back on our lives....she doesn't bother herself or the reader with the big events that went on around her, rather it is the little everyday events that fill her book.  When I look back on my life, I find that I have forgotten so much and the events I do remember are the small, everyday things and if  I were to recount those, I am sure I would find many who would relate to what I was saying.  And that's what Barbal does...even though she is narrating the story of a woman who lived in a different century with a completely different background from most of us, her way of telling this tale has a certain timeless quality about it which I enjoyed very much.