A Week At The Airport by Alain de Botton

As I write this I am at London Heathrow's  Terminal 5 on a transit stop between Toronto and Bangalore.  I have 6 hours before my flight to Bangalore and under normal circumstances such a long wait would have sent me over the edge but today I am actually looking forward to it as I get to explore Terminal 5 with none other than Alain de Botton. 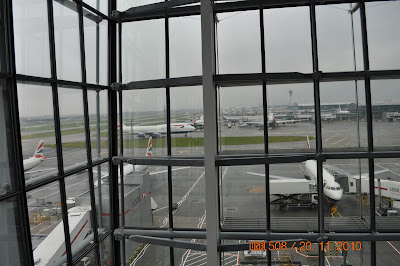 In the summer of 2009, at the invitation of the airport’s owner, BAA, which wanted to showcase its new terminal, Alain de Botton spent a week at Term 5. He was told he could write about anything in the four-football-field-long terminal. Infact, he was even given “explicit permission to be rude about the airport’s activities.’’ The result is a slim volume titled simply, "A Week At The Airport: A Heathrow Diary"

So, book in hand I set out to discover Term 5 along with de Botton. The book begins with a brief introduction, called Approach, which describes de Botton’s decision to accept BAA’s offer to be the “writer-in-residence,’’ and the remainder of the book is divided into three larger sections: Departures, Airside, and Arrivals. Since I can't access "Departures" and "Arrivals" I am going to have to stick with "Airside".

But fortunately De Botton's book touches very little on the physical geography of the airport and instead  devotes a lot of ink to passengers at the airport.  Being in an airport, he writes, is an opportunity to observe people, "to forget onself in a sea of  otherness and to let the imagination loose on the limitless supply of fragmentary stories provided by the eye and ear"

Meeting passengers posed no problem  for de Botton as most travellers thought he was an airline employee and therefore a potentially useful source of information on where to find the customs desk or the ATM machine. However, those that took the trouble to read his name badge came to regard the desk as a confessional. Each new day brought a density of stores and soon his little notebook was entirely full with anecdotes of loss, desire, expectattion, "snapshots of travellers' souls on their way to the skies." 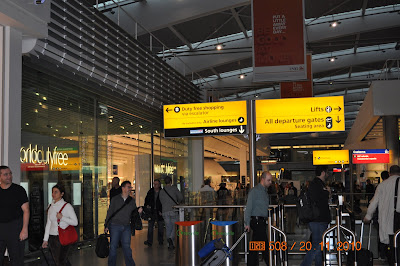 Passengers "Airside" at Term 5 (photo credit Lotus Reads)
One particularly poignant story was of a man embarking on what he (the passenger) wryly referred to as a "holiday of a lifetime" to Bali with his wife who was just months away from succumbing to incurable brain cancer. She was only 49 years old.  Another traveller that de Botton encountered revealed that he had two families, one in the UK and the other in Los Angeles and that neither knew about the existence of the other!  De Botton muses that the reason he managed to get such personal and moving stories out of passengers is because when we (essentially land creatures) are about to defy gravity and take to the sky it makes us particularly anxious, thoughtful and prepared to share stories about ourselves we may, under normal circumstances, not discuss with a stranger.

De Botton rues that most passengers rush through an airport, their only intent and focus being to complete formalities and to catch their flight. He thinks it's a pity that more travellers do not stop to enjoy the architecture of the airport building and more importantly, the potential and possibilities that being in an airport can evoke.  For instance, take the departurescreens with their long lists of destinations.  These screens imply a feeling of infinite possibilities and longing.  Where should we travel to?  Casablanca in Morocco?  Phnom Penh in Cambodia? Anchorage in Alaska? The ticket desk is only a few short steps away and they suggest an ease with which we might buy a ticket for a destination "where the call to prayer rang out over shuttered whitewashed houses and where no one knew our identities". There is such potential for dreaming and for our imaginations to take flight (pardon the pun) when we're at an airport but most of us are so frazzled from all the airport formalities that we barely have time to relax and ruminate, or so the author concludes.

I loved de Botton's musings on Airline Security. The training of security personnel is so arduous - they are trained to look at every human being as though he or she might want to blow up an aircraft!   They have been trained to overcome all prejudices as to what an enemy might look like: the enemy could be a six-year old with a cute smocked frock and with a juice box in her hand or an eighty-year old grandma with a bunch of Christmas stockings for her grandkids. The levels of alertness that security guards need to maintain is so grueling that they were granted more frequent tea-breaks than any of the other airport employees. 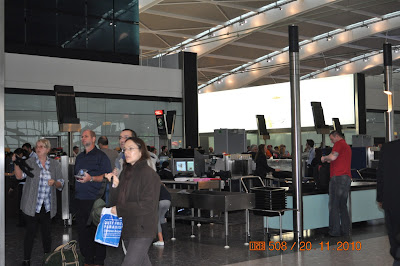 
And then no book about an airport could be complete without mentioning the shops and goodness knows, Heathrow's Terminal 5 has an abundance of them...infact, many people initially complained that Term 5 was more like a mall than an airport.  De Botton muses that those people that objected to too many shops had probably considered that in the event of a catastrophe, they wouldn't have liked to have spent their last few moments on earth indulging in a vice like consumerism! :) 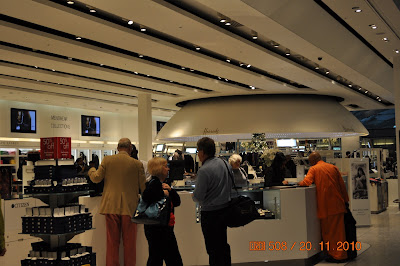 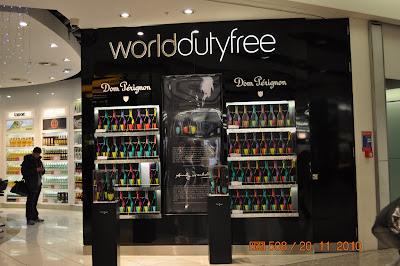 Duty Free at Term 5 (photo credit Lotus Reads)
The book is dotted with many philosophical musings and makes for a truly enjoyable read.  Let me leave you with one last thought of a passenger named David who was taking his family to Greece on a vacation.  David had confided in de Botton that his wife was upset at him for putting work over his family.  But in David's mind, he worked hard so that he could give his family vacations abroad and other good things.  De Botton then observes the very true Jewish saying "Wherever you go, there you are"...in order words,  David will be bringing himself with him on this vacation, would he be able to leave his irritation with his wife behind and enjoy the holiday?  Unlikely.  One's surroundings might change but unless we change the way we think and feel nothing truly changes. This is an important truth of travel. 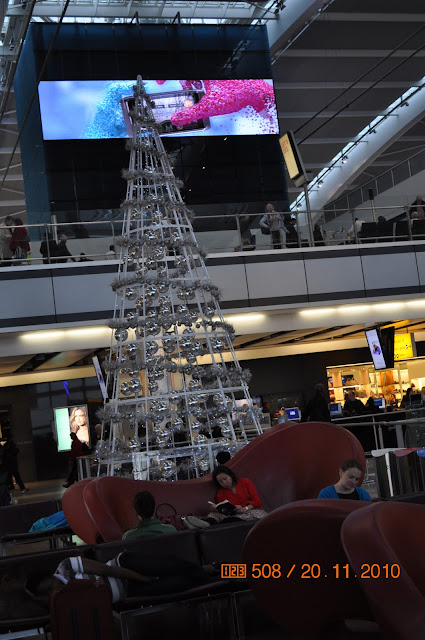