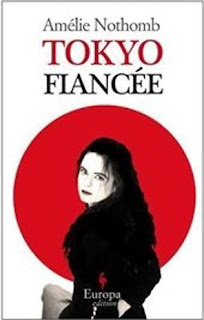 Nothomb writes this to explain the phenomenon of "train-station" universities in Japan. Train-station universities are as numerous (yes, you guessed it) train stations and most students visit campus just to meet up with friends or to model their latest outfits...academics is the last thing on their minds and because the syllabi at these universities are student-friendly, most everyone breezes through their courses.

The novel "Tokyo Fiancee" is filled with other such cultural tidbits about Japan and the Japanese, but that is not all you should be reading this for, it is also a tale of sweet but largely unrequieted love between the author, a Francophone Belgian, visiting Japan to refresh her Japanese language skills and to teach French to Japanese students and Rinri a young Japanese man, totally in love with the French language and by extension, anyone who spoke la Francaise. To Rinri, being able to express himself in French gave him license to indulge his inadmissible feelings of love...something he couldn't have done in Japanese or to a Japanese woman as it is impolite in Japanese society to talk of love. In Japan, love is the stuff of literature, not real life.

Amelie is completely charmed with Rinri and the sweet love and concern he shows for her, but when Rinri starts to press the issue of marriage Amelie gets uncomfortable and hastens to find a way out (and I thought it was mostly men that had trouble with with the "C-word"!) No wonder then, the publishers have described this as a contemporary love story, where the woman's love of independence trumps her desire to be loved and needed.

Amelie, in this sweet autobiographical novel, says what she experienced for Rinri can best be explained using the Japanese term, "Koi"which is understood as a relationship in which a couple likes one another enough to be intimate but one that does not come with the trappings of love - a relationship based on camaraderie and sexual desire rather than romance. Do we have the equivalent of "Koi" in the English language? I am curious to find out!

This is a wisp of a book, only 152 pages, but a very worthy read. Nothomb is a very entertaining writer with a mischievous sense of humor. She also skillfully uses the linguistic and cross-cultural misunderstandings between herself and Rinri to offer fun insights into Japanese traditional culture...the ending is exquisitely tender,I had tears in my eyes!

If you like "Tokyo Fiancee" you might also want to read Nothomb's "Fear and Trembling", about a sadistic coworker who instructs her in the rigid hierarchies of office life. "F & T" is drawn from Nothomb's time working at a large Japanese corporation.
Posted by Lotus Reads at 6:45 a.m. 14 comments:

Honolulu: A Novel by Alan Brennert 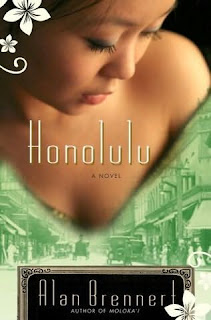 Scared yet excited, fatigued but energized, Regret and a group of young picture brides from Korea look out from a cabin window as the old ship they had boarded in Yokohama, Japan pulls into the Port of Honolulu, Hawai'i. Each girl expects to see a young, nice-looking gentleman of means (as per photos received) so imagine their shock and horror even when they discover that instead of handsome young men they are greeted by a motley group of wizend older men with skin as tough as hide revealing that the owner of that skin was not a scholarly man who had a white-collar job but one that had to work hard in the open. One of the girls is so overcome with disappointment and horror that she uses whatever money she has left to board the ship back to Japan and then Korea. The other picture brides are not so lucky and they, including Regret, disembark the ship, marry the men waiting for them and spend the next few years enduring the tough life of sugarcane plantation workers in Hawai'i.

After Regret is beaten up by her husband several times (and miscarries due to the beatings) she runs away to Honolulu , shrugs off her unfortunate moniker "Regret", takes on a new name "Jin" (gem) and in her new avatar she becomes a seamstress, mending clothes for hookers in order to keep herself afloat. Jin's story follows a lot of twists and turns not unlike her adopted country and Brennert does an excellent job of tying Jin's story to the historical events in Hawai'i at that time.

Although this is historical "fiction", Brennert's book feels meticulously and exquisitely researched...it is filled with cultural details of that period - songs, food, clothes, historical events and even historical figures. I have, however, just one quibble with an incident that occurs in the early part of the book:

When Regret was beaten up by her husband for the second time she was advised to go to the Pastor of the Korean Methodist church for resolution, I wonder why Brennert didn't have her go to the local Dong-Hoi instead. According to histories written about the plantations in Honolulu, the Korean plantation workers had banded together to form a mutual aid society called Dong-Hoi with, at its head a judge (voted in by the workers) called Dong-chang. THe Dong-chang ruled in marital disputes and a man beating his wife was seldom tolerated. Also, the Dong-Hoi did not encourage gambling and drinking, infact, they prohibited it, so I am not sure how Mr. Noh, Regret's husband was painted by Brennert as a gambler and drunkard.

But aside from that quibble, "Honolulu" is a wonderfully-written tribute to the people of Hawai'i and while it is primarily the story a story of Jin, the Korean picture bride who had to learn to throw off the Confucian notion that women were worthless, it is also the story of how Asian, Portuguese, Spanish and Filipino workers were brought to Hawai’i by the sugar barons who needed laborers to work on the plantations, thus sowing the seeds for the multi-ethnic society that Hawai'i is today and that America is mirroring. Brennert likes to say, the story of Honolulu is in many ways the story of Barack Obama, and the story of America as well.

Finally, Hawai'i, at some point or another figures on everyone's travel plans...rather than just arming yourself with the usual guide book, why don't you grab a copy of "Honolulu" and learn, through the most wonderful and evocative writing, the history of Hawai'i? Reading and knowing the history of a place can add a different dimension to one's travel there.

This is Alan Brennert's second novel featuring Hawai'i. The first, was an equally wonderful book titled "Moloka'i", which I would recommend very highly too

And now here's a dessert talked about several times in the book. Enjoy! 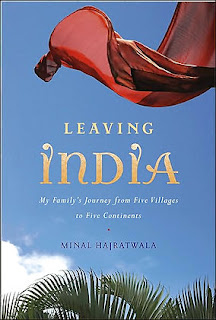 Sorry it's taken me so long to come up with another review...I have been reading "Leaving India" by Minal Hajratwala and although it's not a door-stopper it's not one of those books you can speed up, hence the delay.

When I first heard about "Leaving India: My Family's Journey from Five Villages to Five Continents" by Minal Hajratwala, and what the publishers had to say about it -

Leaving India: My Family's Journey from Five Villages to Five Continents . Beginning with her great-grandfather Motiram's original flight from British-occupied India to Fiji, where he rose from tailor to department store mogul, Hajratwala follows her ancestors across the twentieth century to explain how they came to be spread across five continents and nine countries. Hajratwala ... (more)brings to light for the very first time the story of the Indian diaspora and its shaping by the historical forces of British colonialism, apartheid, Gandhi's Salt March, and American immigration policy. (Houghton Mifflin Harcourt)

- I thought I would lap all of this up in one sitting...after all....being an Indian myself and with relatives all over the world this could have been my story...but after a great start I found myself easily bored with the book. I just felt there were too many detailed descriptions and anecdotes about far too many members of this humongous family, some of which were nice to read and others, downright boring. The part I liked the best was when Minal turns the microscope on herself and writes about her experience with racism in the US and her coming out to the world and her parents about being a lesbian. It was the part that touched me the most...such a pity I had to wait till the end to read it.

I think you will be well served to just listen to a couple of numerous interviews Hajratwalla has given NPR and other radio stations and, ofcourse, ifyou are still clamoring for more, there is always the book.