The Thing Around Your Neck by Chimamanda Ngozi Adichie 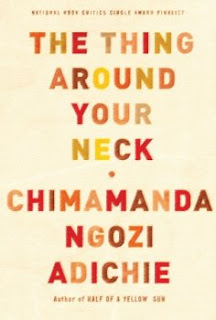 
After having amazing success with her first two books, "Purple Hibiscus" and "Half of a Yellow Sun" (which won her both the Orange Prize for Fiction in the United Kingdom and a $500,000 MacArthur “Genius” grant here in the United States), it seemed inevitable that Chimamanda Adichie would soon launch a book of short stories. "The Thing Around Your Neck" is its intriguing title and it contains 12 short stories some of which are set in Nigeria (the author's home country) and the rest in the US focusing on the Nigerian immigrant experience, the fragile balance of family life and the cultural fissures manifest among Nigerians settled in America.

Maybe it's just the short story format that I am not partial to, but many of the stories, although very readable, failed to engage me in the way Chimamanda's writing normally does. Well, perhaps, I shouldn't be blaming the short story format because I didn't have any difficulty enjoying Jhumpa Lahiri's "Unaccustomed Earth" or Daniyal Mueenudin's "In Other Rooms, Other Wonders", but I found myself just very mildly engaged in many of the stories from "That Thing About your Neck". Come to think of it, using JL's collection of stories as a yardstick is probably being very unfair. Most anthologies of short stories from a single author are mixed news, at best. If one, two, or perhaps three stories succeed, the reader feels the collection worthwhile. JL's book was an exception where all of her 8 stories were wildly praised by readers and critics alike...definitely a triumph!

Ofcourse, there are flashes of brilliance in "That Thing Around Your Neck", but not nearly enough to make me go you MUST read this book!!! Having said that however, I would like to point out some of the stories that you might enjoy reading. The title story for instance, which implies the choking isolation of a Nigerian girl who relocated to the US from Nigeria only to find that her new country is nothing like she expected, is one which astutely explores the alienation and loneliness that an immigrant feels. She does find love with an Africa-philiac man but cannot figure out if he loves her for her or if he loves her for being an exotic African woman. She notes, "white people who liked Africa too much and those who liked Africa too little were the same-- condescending". With this storyline Adichie is also turning the lens in on Americans and their rather mixed relations with Africans.

Then there is "The Arrangers of Marriage," where an orphan is forced to marry a Nigerian medical student doing his internship in the United States. Again, like the girl in the title story, this protagonist also finds things are not as she was led to believe, for her new husband had omitted to tell her family that he was already married to an American woman (for a green card) and was yet to be divorced from her. In creating protagonists like these Adichie is keeping it very real because many immigrants leave their homeland thinking "the grass is always greener on the other side" only to find out that it isn't necessarily so. The frightening thing for such immigrants is that once they leave, Nigeria is no longer home either. Home is now a gray space between the two.

"Jumping off Monkey Hill" is apparently autobiographical and the setting is a writing workshop for promising African writers but lead by a white scholar, an apparent "expert" on Africa, who criticizes a story with a homosexual theme put forward by one of the participants saying "homosexuality stories weren't reflective of Africa". Which leads to the question...what is an African story? What is perhaps noteworthy is that Adichie has three stories in this collection with a homosexual theme!

My favorite story of the bunch was the last one, titled, "The Headstrong Historian"...I simply love how Adichie used this one family's history to illustrate how the advent of Christian missionaries and the free education (in the white man's language) they offered the children of the Africans severed the people from their faith, history and culture. A very moving story. I've linked to the story in the "Newyorker" magazine so you can enjoy it as well!

A summary of this book inevitably makes it seem bleak, but because these stories are shot through with grace, elegance and empathy they leave the reader with a positive, rather than negative impression. Adichie's language is clean and crisp, with a musical quality that I have enjoyed in her previous novels and which I am pleased to note continues over to this one.
Posted by Lotus Reads at 8:17 a.m. 25 comments: