An Affair With Indian Cooking: The Khaana Sutra of Indian cusine by Geeta Maini Six months ago, bored with my repertoire of recipes I decided to visit the library hoping to find a book that would breathe some life into my old, tired menu. As most of you well know, the library has a stack of recipe books making it rather hard to pick one, but the ingenious subtitle, "The Khaana Sutra of Indian cuisine" on Geeta Maini's book titled, "An Affair With Indian Cooking", caught my eye and made me pull it off the shelf. I was rewarded with such an aesthetically- pleasing book....its quality soft cover makes it easy to hold and the pages inside are dripping with eye-popping food photography and recipes which are very easy to read.

I carried it home excitedly and although the aim was to start cooking from it immediately I was drawn to Geeta's introduction of how she grew up in Kenya in an extended (Punjabi) family where her mom and aunts did most of the cooking. When she moved to Canada as a young bride she realized she was now the prime nourisher for her family, forcing her to hone her skills as chief cook, a job that she has perfected over the years.

The recipes in Geeta's sumptious book are arranged in organized sections with tantalizing subtitles that made me smile. Ofcourse, this being the "Khaana Sutra" (you might have heard of the Kama Sutra?) a referring to appetizers as "seduction of the palate"; Meat and Seafood as "Succulent,Saucy Somethings" and Desserts as "the final embrace" seems very fit. Some of the recipes have accompanying pictures but all include a brief introduction, giving you the history of the dish or why Geeta chose to include it in the book. The recipes are well laid out and many are garnished with additional cooking tips and laced with suggestions on how to change the dish around so as to give it a different flavor the next time you make it( I found the suggestion box to be incredibly helpful!) .

The book closes with a chapter on Menus (Planning the Affair) - another wickedly delicious subtitle - where Geeta, using the recipes provided in the book, creates menus for a complete meal. You can find menus for a "Spiced-up Christmas Brunch", "Formal Dinner Parties", 'A Sunday Brunch" and much,much more. I made my sampler meal from the"Meals in Less Than an Hour" menu which included:

I had made the "Yoghurt with Cucumber" and "Cumin Rice" before (and she's right, both dishes take around 15 mins to prepare). This was my first time making the shrimp with coriander and Tamarind and what a treat that turned out to be! Not only is it terribly simple to prepare but the combination of the sweet and sour flavors with the aroma and taste of the roasted spices is guaranteed to make your tastebuds dance!

Know someone that enjoys Indian food but is intimidated by how long it can take to prepare? Give them Geeta Maini's book. Her recipes are truly simple and easy to follow without compromising on taste or authenticity. Not just that, in "An Affair with Indian Cooking" Geeta also shares, through her recipes, her culinary heritage and recipes enjoyed by generations of her own family. In my opinion, this book is the perfect introduction to Indian cuisine.


Now, just before I sign off, here's a the recipe for "Green Coriander and Tamarind Shrimp" or like they say in Hindi, "Hare Dhaniya Aur Imbli ka Jhinga" Enjoy!

`Wash shrimp under cold running water and set aside to drain
`In a shallow saute pan heat the oil and butter on med. high heat
`Temper with the cumin and coriander seeds. Once they start to sizzle, add the onions and garlic `Reduce heat to medium and saute until onions are soft and slightly pink
`Add the fresh coriander, salt, cumin powder and green chillies. Stir until well mixed.
`Add the tamarind paste and stir until all te spices and ingredients are now well blended.
`Add the shrimp and cook until the shrimp turn pink and are well coated with sauce (8-10 mins) `Adjust seasonings - if desired add the brown sugar for a sweet and sour flavor.
`Serve over a bed of couscous pilaf or with a crisp naan and mango salsa

Ghost Train To The Evening Star by Paul Theroux 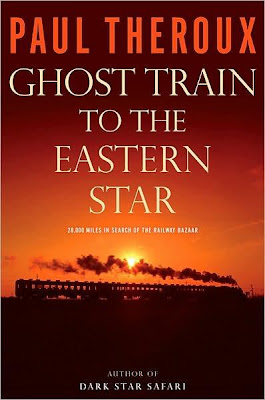 Thirty-three years ago noted travel writer Paul Theroux made a looping journey by train from London through Central Asia to Japan and all the way back again. This epic journey was the subject of his best-selling book "The Great Railway Bazaar". In 2006 he decided to retrace his steps and the book inspired by his return journey is called "Ghost to The Eastern Star" .

So, the big question is, why did Paul Theroux undertake the same journey? Why didn't he go somewhere he's never been before? Well, for starters, Theroux is wary of other travel writers taking "his" trip and then going on to write a book with the likely title, "In The Footsteps of Paul Theroux"! Also, he thought it would be a good idea to see how globalization had changed the world in 33 years...and most of all, to find out if he had changed as a traveller.

One thing he found that hadn't changed was his love of travelling by train. Theroux was more than happy to travel in hard seat, second class carriages, share his space with stinky strangers, endure their opinions often with no language in common and even their food, knowing that, as he puts it, "Luxury spoils and infantilizes you and prevents you from knowing the world."

If you pick up this book expecting it to detail tourist attractions, museums, cultural to-do's, things to eat, places to see etc. you'll be disappointed. To travel with Theroux means to be treated to a cornucopia of thoughts, impressions, observations, judgments, conversations, opinions,reminisces, etc., many of which may not even be connected to the place in question. As jumbled as this may sound, Theroux is in fact a very entertaining and informed writer and you will welcome his observations, even if he is given to making sweeping generalizations, for instance, "Georgia" , he concludes within days of arriving, is "a supine and beleaguered country of people narcissistic about their differences." About China he says, "(China) exists in its present form because the Chinese want money.", but he seems to reserve most of his ire for the Singaporeans which he describes thus: "Singaporeans' personalities reflect that of the only leader most of them have ever known, and as a result are notably abrasive, abrupt, thin-skinned, unsmiling, rude,puranitical, bossy, selfish and unspiritual. Because they can't criticize the government, they criticize each other or pick on foreigners. And in this hanging and flogging society they openly spank their children..." pg 327

So, coming back to the premise for the book, did Theroux find a whole lot had changed? I think it's fair to say that of all the places he travelled to, Burma had stayed virtually the same, that is to say, it hadn't made any progress in 33 years, if anything it seemed to have become worse... "It (Rangoon) looked pessimistic, unlucky and badly governed. It had no bounce. It was a city without visible ambition: no challenge, no defiance. Being youthful here wasn't an advantage, nor was strength any use; brains just made you unhappy and a target for the secret police..." pg 265

Cambodia, which he could not enter on his first time, remains traumatized by it's violent recent history..."Most Cambodians have a memory of the bad years; the hurt was apparent in their posture, in their voices, in their eyes."

Vietnam was the place he found had changed the most and seemed to have his utmost admiration (which is saying a lot because it takes quite a bit to impress Theroux). In the '70's Vietnam was flattened by America, but they crawled out from the wreckage and rebuilt a very viable country without American aid. Infact, it has now become a capitalist paradise, trying to beat America at its own game. Best of all, none of the Vietnamese Theroux met seemed to hold a grudge against the Americans, even though they were put through hell...an incredibly forgiving nation/

Despite all the hype over the New India, he found little to celebrate. Cities like Bombay and Bangalore where the economic boom is happening have not evolved but been crudely transformed. Beyond the concentrated cores of wealth, Theroux saw "the India of the hut, the cow-dung fire, the bean field, the buffalo, the ox cart, and the bicycle — of debt and drought and death." He also saw a people for whom rituals, religion, beliefs and superstitions form an intrinsic part of their fabric. India's link with her past and religion keeps her looking backwards, on the other hand, China has been transformed and he is of the opinion that it was able to modernize because it has severed its links with the past, which has cost it its soul and many traditions.

All in all, I would rate this book highly. Theroux is a fearless traveler and definitely not afraid to speak his mind, nor does he feel the need to toe the line of political correctness. He calls things as he sees them and I welcome such honesty in a traveler. Also, Theroux's writing is not so much about the sightseeing as it is about the people and conversations with them. There is an abundance of wonderful dialogue in this book along with some entertaining chats with other writers like, Orhan Pamuk, Pico Iyer, Murakami etc. There is a lot you will learn from reading this book despite it's rather melancholic conclusion:

"Most of the world is worsening, shrinking to a ball of desolation. Only the old can really see how gracelessly the world is ageing and all that we have lost. Politicians and policemen are always inferior to their citizens. No one on earth is well governed." But is there hope? Yes, because strangers usually help, ghosts can travel and the going is still good.

The reference to ghosts in the passage is how Theroux sees his traveller self. He says that at 67, he feels “invisible” while traveling..."Young people seem to look right through you, acting as if you're not there, as they board a train, bus, metro or plane. You are inessential, overlooked". Sure, this may be regrettable, but very useful to a travel writer because you can make observations and record experiences, all the time listening while remaining unseen.
Posted by Lotus Reads at 11:52 a.m. 24 comments: