It's possible that one of Paris' best kept secrets is its Grand Mosque.  Open up any guide to Paris and you will be floored and impressed with write-up's on the Louvre, the Notre Dame, the Eiffel Tower and so on, and so should you be because they are marvellous sights, but after our trip to Paris my family and I have unanimously decided the Grand Mosque is a "must-see". 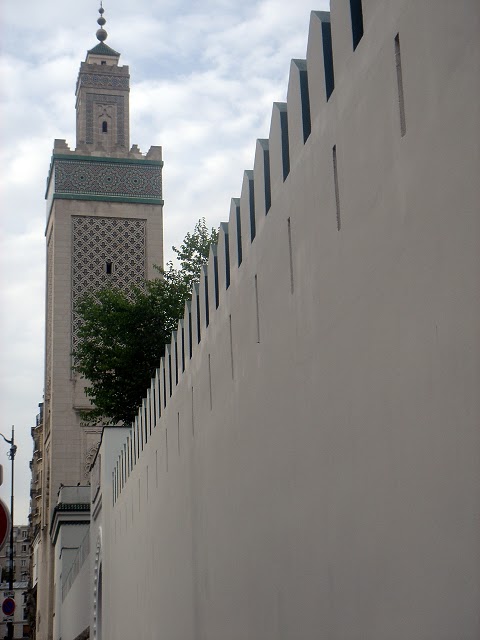 Built in the Hispano-Moorish style this mosque is a splendid showcase of North African architecture which stands out even more because it is planted among rows of French-style buildings.  The minaret is about a 100ft high. 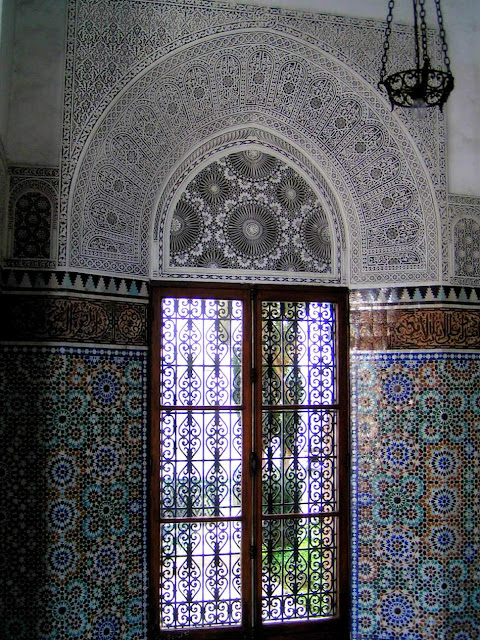 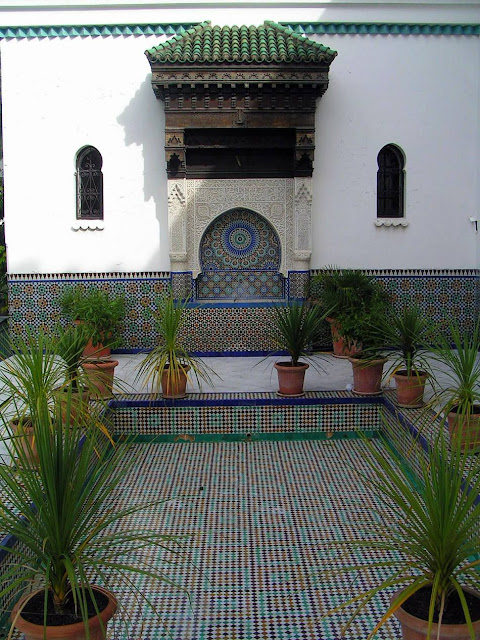 You have to pay to enter the Mosque but it's all so worth it. I could star at this intricate mosaic work for hours. 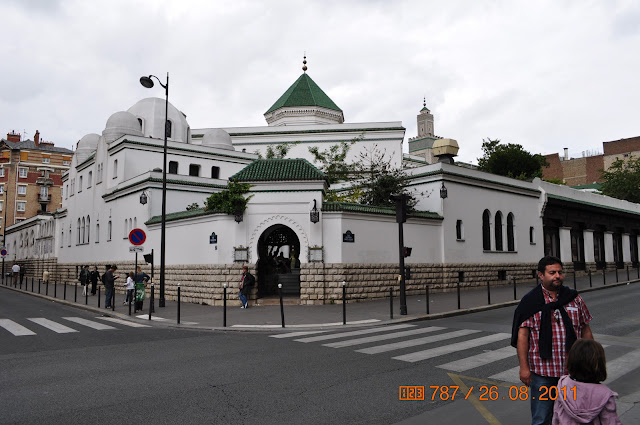 This is the entrance to the Courtyard, Hammam and Tea shop. 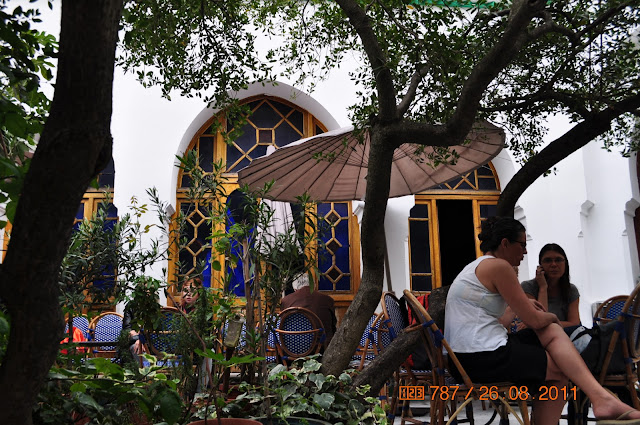 The Courtyard, with its fig trees, fountains, hookahs and mint tea, is the perfect place to relax. 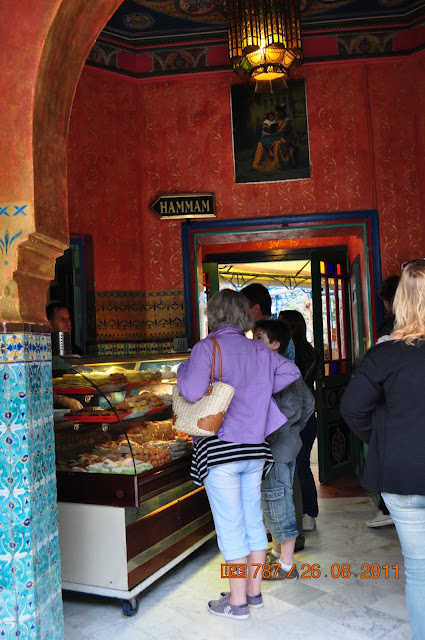 It all began with the tea shop selling North African delicacies like Turkish delight, almond cakes, baklava and so on.  The tea place got so popular that a full-fledged restaurant serving Couscous, Tagine and so on, followed suit very quickly. 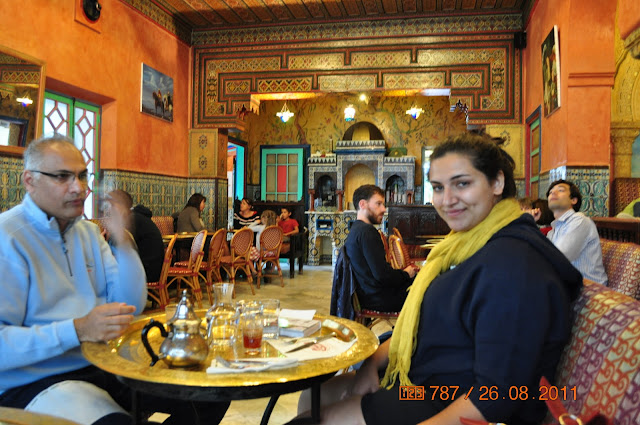 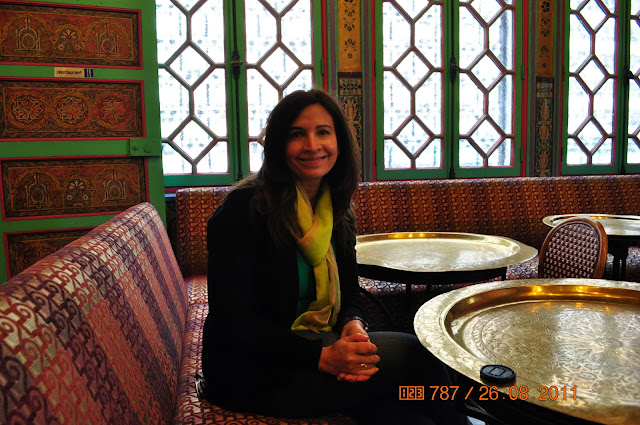 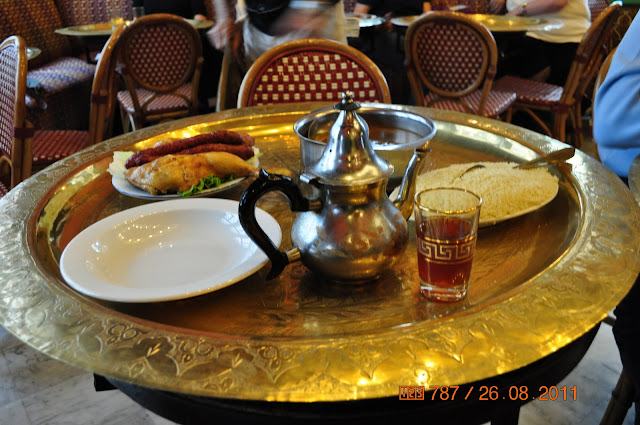 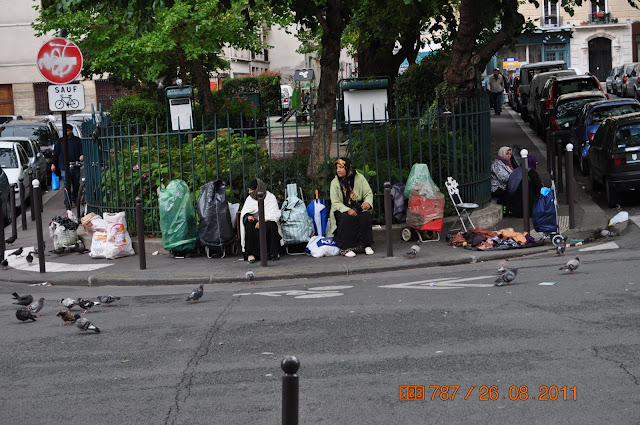 The only off-putting thing about the visit was the number of beggar women outside the Mosque. I guess it's the same of any place of worship, but these women, many of them in sunglasses to protect their identity (?) were a little intimidating!!!

Really liking your Paris series. I've done my grand tour de Paris but if I had to go again would take some of your tips. I regret staying in a very posh (though in the single non-posh hotel) on the Right Bank where the hotel staff was snooty and rude. I think I would've liked Paris a lot more if we did the apartment thing in a colourful neighbourhood like you did. We did that in Rome and I loved it.

Hello Bride - how I love your screen name! :)) This was our first experience with apartment living and we enjoyed it so much. The lady we rented it from was wonderful to deal with and she put a lot of effort into decorating the apartment so it felt like a home away from home. The experience wasn't as nice in Barcelona. This time we rented from a company rather than an individual and the place was lifeless and impersonal. You could tell right away they were in it simply for the money. So yeah, one tip, rent directly from the owner wherever possible.

I haven't done Rome yet, but I would like to and when I do I'll be knocking on your door for ideas, if that's okay!

Thanks for the visit Bride, do drop by again soon!

I absolutely love your travelblog Angie so much better than the pictures on FB. I've not seen the Grand Mosque in Paris maybe for my next trip (the fifth, we have cheap flights to Beauvais from Glasgow) it will be on the itinerary. The fashion article was so right, you dress for the part always and get it right! As for the shopping I forgot about Gallerie Lafayette as I had been there ages ago. It is stunning department store. So glad to get a glimpse of your holiday.Looks like Sonia enjoyed it too! Waiting to see pages on Barcelona.

Hello Leela!!! I'm so glad you like the pictures. I posted them here because I wanted them to be enjoyed in hi res...FB doesn't do most photos any kind of justice.

It won't be long before you are in Paris again, you lucky thing! Yes, a visit to the mosque with a small lunch at the restaurant is definitely something you would like, and if you have the time why not treat yourself to a nice massage at the adjoining hammam?

I have a few more pages to do on Paris and then I'll get to Barcelona...thanks Leela!

Loving these pics. Glad that you put them up here. The one problem with FB pics is somehow they don't give the same feel as they do here. Especially for something like this, I guess a blog post truly is worth it.
When was the grand mosque built?
Were you able to visit the part where the religious functions happen?
Loved the pics of the food! Yum!!
I am not surprised by the pics of the beggars outside the mosque. I think every society has a under class that is easy to miss.
The French recently passed a ban on street prayer. Not related to this but it just crossed my mind when I saw your pics.

Wow - what a nice surprise to see your travelblog. It's wonderful, Angie! I thoroughly enjoyed your beautiful pics of the Grand Mosque. The colors and architecture are exquisite! Like so many others, I had no idea this even existed in Paris.

I am thoroughly enjoying this brilliant documentation of your trip.The Grand Mosque pictures were a treat to see including your family pictures in the restaurant.Going back to see the rest.

Your writing makes the pictures even more fab! Its like being able to live in those moments. The Grand Mosque is quite a treat, from its art, to its food! Did you get to "experience" the Hammam? The tea shop looks quaint and lovely! I could live on Almond cakes and baklavas. I would be intimidated by the beggar women too. Surprising that beggars are usually women there. After the ban on burqa in France, do you still see them?

Thanks Everyone! It's really great to tead your comments!

Sanj, yes, I read about the ban on street prayer shortly after I returned from vacation and no, we were at the mosque and the adjoining restaurant for a very few hours so I didn't get to see the prayers or any other religious function. It was a lovely experience though because unlike Canada where the Muslim population is so diverse, the muslims in Paris tend to be from one main region - North Africa - hence the activities tend to follow a NAfrican tradition which is quite foreign and thus interesting, to me! :)

Thank you Anon, or is that you Sarah Nathan? :)

Dipa, thanks and you're welcome! Stop by as often as you like.

Hi Shirin! So glad you're enjoying the pics! No, we didn't try the Hammam at the mosque but I have been to one in Turkey and I will never forget the experience. Highly recommended!!! Yes, I was surprised at the number of women beggars at the Mosque and strangely enough, they all had their heads covered, some even had their mouths covered and many had dark,dark sunglasses. Everytime they thought they saw the Police they would scatter and then re-group later! lol

What a nice surprise to see your travelblog. It's wonderful!

The fashion article was so right, you dress for the part always and get it right!