What's the first thought that comes to your mind when I mention Barcelona?  If you thought "Gaudi" you would be with the majority for Gaudi is synonymous with Barcelona.  Everywhere you go in the city, you're never too far away from a Gaudi casa or sculpture. Infact, the road we lived on in Barcelona, Las Ramblas, has several little Gaudi sculptures, photos of which I will include later.

Gaudi's work, which has been described as "Catalan Modernisme" is supremely original.  Apparently he was inspired by a nationalistic search for a romantic medieval past and there are elements of medieval and surreal styles in a lot of his work.

Below are pictures of Casa Batllo.  I fell in love with this Casa the minute I laid eyes on it because it looked like a house out of a fairytale. Later when I was reading up on the house I discovered that this apartment block was designed to symbolise the legend of St. George killing the dragon, whose scaly back arches above the main facade. 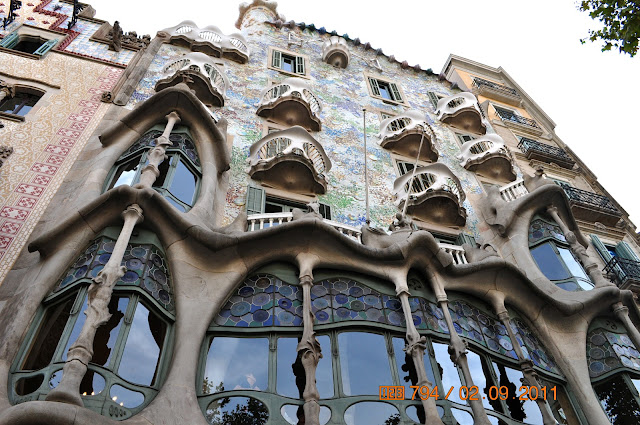 Facade: It is said that when Salvador Dali saw the curving walls and windows of Casa Batllo he observed them as "representing waves on a stormy day".  Because the spindly columns were sometimes compared to tibias, Casa Batllo was also called "House of Bones" 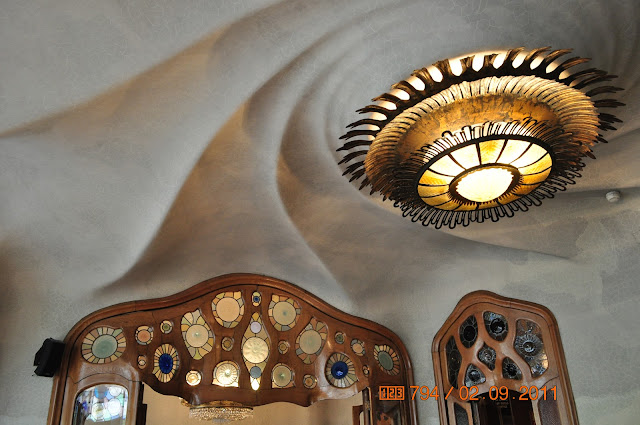 Dining Room: The bulbous forms in the ceiling of the Batllo family's dining room are thought to represent the splash caused by a drop of water. 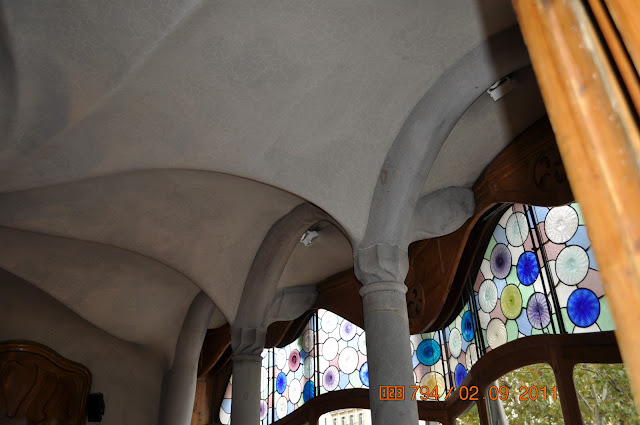 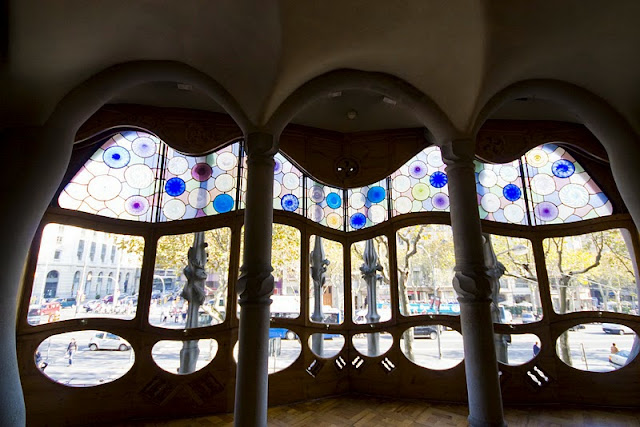 The Main Drawing Room:  "One side of this room is formed by stained-glass windows looking out over the Passeig de Gracia. The ceiling plaster is moulded into a spiral and the doors and window framed undulate playfully." 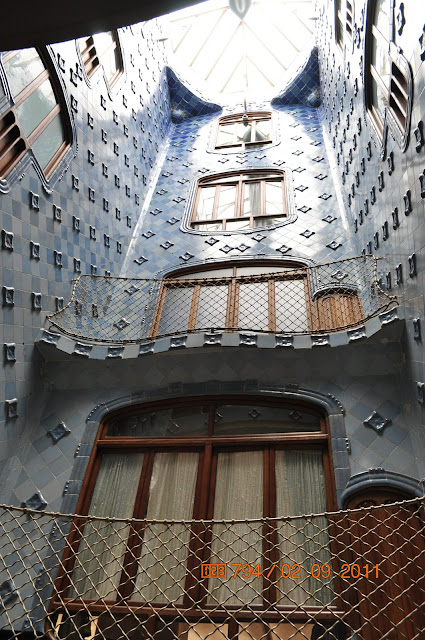 The interior skylight at Casa Batllo...you can't tell from this photo but the blue gets more intense as you travel upwards.  This is so that the intensity of light is equal no matter which floor you go to. Gaudi was a genius! 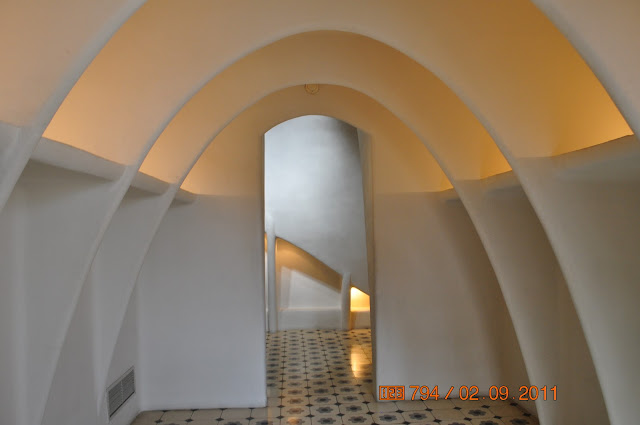 Attics:  Don't the arches give one the sensation of being inside the skeleton of a large animal? 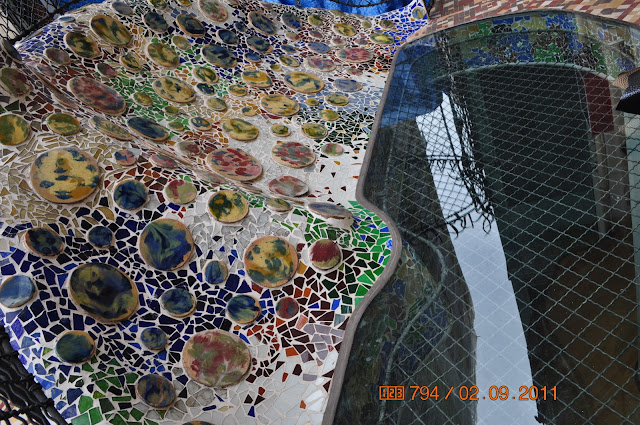 Some people say Gaudi created Casa Batllo after reading Jules Verne's "20,000 Leagues Under The Sea" and wanted the house to appear as though it were under water.  In this case, the mosaic pattern could easily pass for a colony  of brightly-coloured molluscs. 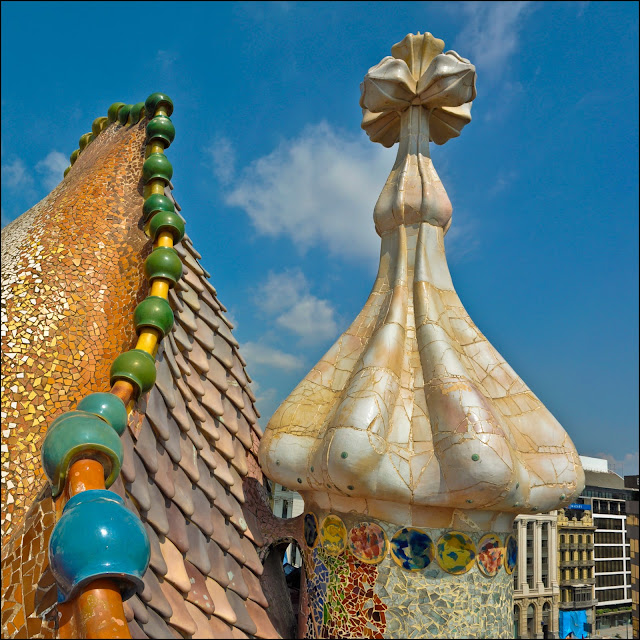 One of the most talked-about features of the house is the Dragon's Back and Cross.  The Cross was made in Mallorca but was damaged in transit . Gaudi apparently liked the cracked facade and refused to send it back for repairs. 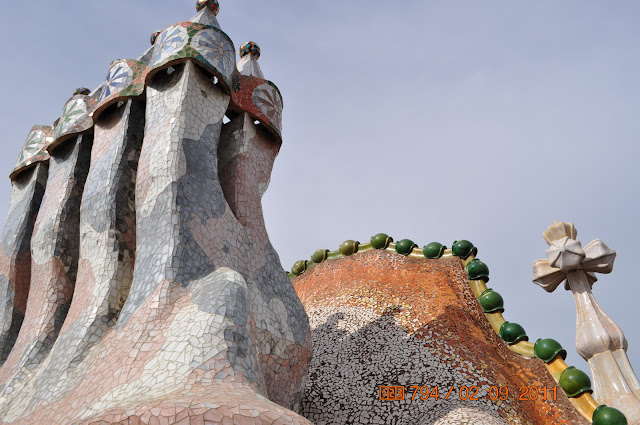 Another view of the cross but this time with the chimneys.  Chimneys were usually an unseen, hidden part of the house but Gaudi liked to show them off.
Posted by Lotus Reads at 1:56 p.m.

This is a wonderful introduction to the world of Gaudi and the Batllo house.Excellent photography along with concise descriptions made this a visual treat.Great job done.

Lotus amazing pics, and a wonderful description to go with them. Made it seem like I was there.
Thank you!

I loved Casa Batllo too. Your photos are brilliant, such detail. You have captured the beauty and OTT aspect of the architecture that one marvels at. Did you get to Park Guell- another Gaudi Fest?

Yours is a travel blog to treasure.
I look forward to the next episode with bated breath.

Hey Dips! Sorry for getting back to your comment so late my friend, but please know it is most appreciated. I'm so glad you enjoyed the write-up...like I never tire of telling you, I thought so much of you when I saw Gaudi's work, I knew you would love it!

Sanjay...seeing Casa Batllo was a magical experience. I feel so blessed to be able to share it with everyone here on my blog. Thanks for enjoying this post Sanj!

Hi Leela! The credit for the photos must go to Sonya. She took every one! And yes, we did go to Parc Guell...it was a gruelling climb to the top, but so worth it. Thanks, Leela!!!

Hey Sarah, soooo sorry for the delayed response. Truly appreciate you taking the time to drop me a line. What a rebel that Gaudi was...I'd like to read his biography some day!