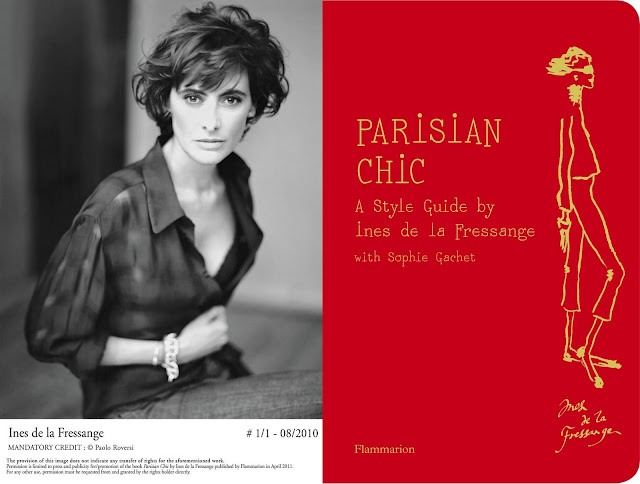 As a woman preparing for a trip to Paris one of my most invaluable reads was Ines de la Fressange's "Parisian Chic: A Style Guide".  Parisian chic is legendary and so is their intolerance for sartorial sins.  I didn't want my vacation getting off on the wrong foot so I invested in Fressange's book and what a good decision that turned out to be.  Fressange,  Karl Lagerfield's muse and supermodel in the 80's, lays out in a very easy-to-read manner all the DOs and DON'Ts of Parisian style. Among her many invaluable tips are these ones:


1)  Never look rich. Bling, glitter and logos are absolute no-no's when it comes to the Parisian woman.  She is uninterested in sporting labels just for the sake of it. Her definition of luxury?  "A brand that guarantees good taste, rather than an all-too-obvious price tag.


2) Like the Parisian, be a fashion icon in your own right, worship no idols.  "The secret of good style is to feel good in what you wear." 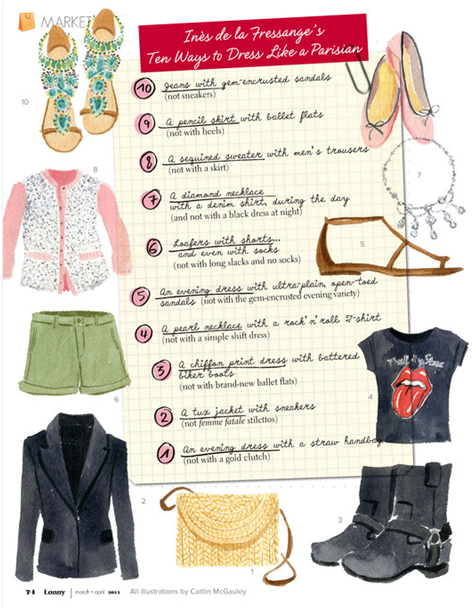 4) And don't you ever wear bras with a transparent bra straps or you will make a Parisian woman's toes curl with disgust. A stylish, visible bra is far sexier...also...no matter how big or small your bust, not wearing a bra is always a mistake.


5) Forget Botox and don't dress like a teenager - trying to look young is the quickest way to look old!


6)  The Little Black Dress: "The little black dress is not simply an item of clothing, it's a concept. It's abstract, it's universal — which means there's one that's perfect for everyone ... Today the Parisian has several little black dresses, just as she has several pairs of jeans: each is a variation on a theme." 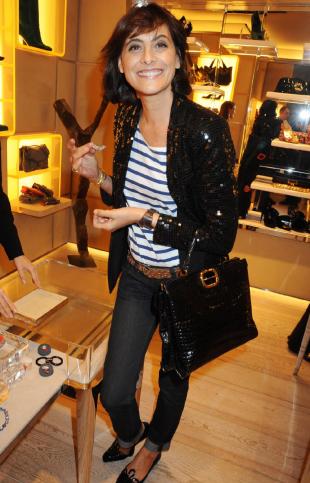 
Here are my impressions of the Parisienne:


She is not good-looking in the way we have come to define good-looking  - symmetrical features, big eyes, full lips, defined nose, high cheekbones and perfect teeth.   But when you see her you just know this is a woman who is confident in the way she looks and doesn't need to resort to trends to be considered attractive.  She possesses a certain something - call it an innate style if you will - that always sets her apart from everyone else.


In my observations I found the Parisienne to be  conservative by nature.  No ultra mini skirts or low necklines for her and the make-up is very subtle too. She is not fond of artificial talons, infact, gel nails which are so popular here are considered vulgar in Paris.  She wears her nails short and usually varnished in a pale pink colour. Natural is in and perhaps that is why you don't find Parisians rushing off to get lasered and botoxed. Infact, in the time that I was there I didn't come across a single clinic for cosmetic surgery, I'm not saying they don't exist, just saying they aren't that popular or lucrative perhaps.


The women (and men) do like to be slim though...if I were to wager a guess I'd say the average dress size would between a 4 or a 6. Apparently  they don't like to work out (they call it an 'American pastime', but they love to walk and cycle.  They are also very heavy smokers and appear to start young.


Oh and how they love their scarves!!!   There were three items of clothing I saw almost every Parisian don - a scarf, a blazer and a pair of ballerines.  They seem to favour vintage scarves and each woman has her own favourite way of tying it.  Olivier Magny who wrote "Stuff Parisians Like" said this about Parisians and their scarves,

" The choice of scarf is a determining social qualifyer of both style and 'class sociale'.  So is the way someone chooses to tie his scarf. Parisians know their scarf will characterize them, identify them, position them, rank them, classify them, distinguish them. There can therefore be no messing around  when it comes to choosing a scarf" pg 217.

Ofcourse, my observations here are just generalizations, meant simply to provide a general snapshot of the beautiful women of my new favourite city.  Sure, there are exceptions, but not too many so if you're a Parisian who doesn't enjoy wearing a scarf, or ballet flats for shoes, I'd love to hear from you! :)

I still don't understand why certain parts of the blog text is highlighted in white. What am I doing to trigger this, I wonder?

Loved reading this! French eating habits/style in another article perhaps?
have a great time x

NJ, thanks! I don't know if I should attempt a post on French food...I could try but I'm not sure I know enough. Stay tuned for other articles though! :)

I think some of your copied text may have HTML elements. The code light tell you why some text is highlighted.
Enjoying the pics Lotus. Making my way to all the diaries slowly. Enjoyed the pics, not sure why you said that your pics weren't great. I love these!
Amazing that shopping place. I first thought it was an opera house!
Nice that you could stay in an apartment. I love those, having seen them in a few movies. I am guessing the experience was worth it? :-)
Did you get a sense of the tough times that Europe is going thru?

Loved loved loved your diaries. Loved seeing Spain and Paris through your blogs. I also loved reading the Parisian Chic. My abso fav: Like the Parisian, be a fashion icon in your own right, worship no idols. "The secret of good style is to feel good in what you wear."

As a Parisian living in the US I know the difference in dressing is quite different, I did however not know cosmetic surgery was scarce, good when I go back it will be a plus as I never had any :))

Ballet flats...LOVE them, and wear them in the US with my skinny jeans...now flats with a pencil skirt I do not know...??? It makes a woman look a bit dowdy/squat, I like to wear a nice 3 3/4 inch heel an elegant simple pump, no platform horror. Scarfs are a must and fitted jackets are so flattering. Yes the French like to be skinny, I am a size 8 so I would probably be on the heavy side. I always wonder how do they remain so tiny.
So this is my take on Paris and yes walking is good, we walk a lot...

Again, thank-you Angelique for all these gorgeous photographs :)

Hi Shirin! Another late response...so sorry. I almost felt relieved after reading "Parisian Chic"...who knew they were such non-fussy dressers? Honestly, the Parisian is so conservative. Nothing flashy about the way they dress whatsoever. But then, they can wear blue jeans, a white shirt and a cashmere blue pullover/blazer and still look like a million dollars...they just ooze style!

Hi Madeleine! Yes, hardly any cosmetic surgery. I notice they weren't big on plucking eyebrows, french manicures or tanning either. The natural look is very much in, but they LOVE their skin products!!! Le Printemps with its widest selection of skin products in the world was always so crowded. I myself am kinda sold on Estee Lauder's range of skincare since visiting Paris! :)))

I'm a size 8 too Madeleine and yes, I felt kinda squat compared with them, but then, I'm not tall either, you are, aren't you?

Another thing I noticed was how women dressed their age. No crazy mini skirts for the older woman or too-tight t-shirts, infact, older women or the grand dames seem to get more looks of appreciation than the younger ones! I would recommend that any woman over forty move to Paris! :)))

great read this one! I stumble upon your blog while google-ing Parisian Chic book. great post!
http://sepatuholig.blogspot.com

Excellent! It is pleasure discovering your blog. I am Indian and have been living in Paris for years and very fond of the Parisian style! My way is a combination of beautiful Indian scarves ou jewelry with the Parisian "classique" like slim jeans or black jacket!