The Secret Lives of Baba Segi's Wives by Lola Shoneyin 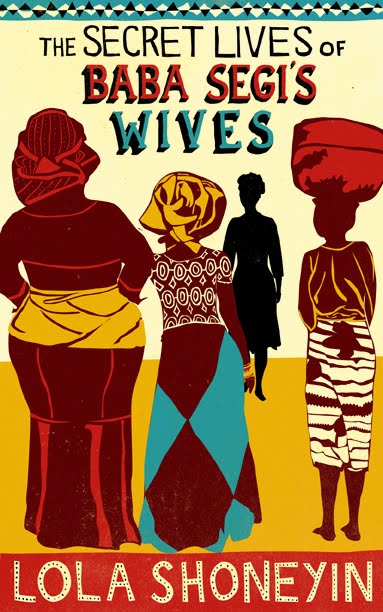 A couple of years ago I remember going to the TIFF (Toronto International Film Festival) for my first ever Nigerian movie.  The movie was titled "Abeni" and I remember being totally regaled by the spectacle: the colour, the melodrama and the sheer number of people cast in the movie!  Nigerian films are very joyous things indeed....with a LOT of dialogue from which you get a sense that the Nigerian people are a very vocal lot...also, they are sentimental with a flair for drama and exaggeration and a healthy belief in superstitions...it is these traits which always make for very fun movies and/or books based in that wonderful country.

Anyhow, I digress, the only reason I brought up "Abeni" is because when I picked up Lola Shoneyin's book, "The Secret Lives of Baba Segi's Wives" its big patriarchal family with the head of the household who thinks he's the big gun but whose strings are being subtly pulled by the wives ( yes,"wives", because Baba Segi, our protagonist, is a polygamist with four wives) and the entertaining theatrics of this family of 12 members immediately transported me to the excitement and drama of Nollywood.

Let me introduce you to the wives:

Iya Segi is the first wife or the Queen of Wives.  Even though she is as round as a watermelon and probably on the bad side of forty, she is wily enough to command Baba Segi's mind, if not his heart. She is the one that disperses the rations in the household and keeps all the other competing wives under control.  Iya Segi is an excellent businesswoman and loves the feel, look  and scent of money.

Iya Tope, the second wife, is meek in comparison and unable, or maybe unwilling, to take charge of anything.  She is more than happy for Iya Segi to call the shots. She is happiest at home braiding her daughters' hair or watching television. She is totally non-confrontational which makes her stick out like a sore thumb amongst this chorus of characters who seem very able to get what they want. Unfortunately this habit of not wanting to confront anything or anyone makes her unwilling to stand up for injustices in the household.

Iya Femi  is the wife I liked the least, but probably the most interesting of them all. Born a Muslim she converts to Christianity and when she arrives at Baba Segi's house she has a belly of fire and brimstone. She is the kind of person who (probably because of her miserable childhood) is happiest when plotting revenge on people. She's the kind of person who suffers from schadenfreude - happiest when someone else is miserable.

And then there is Bolanle.  It is not just her education (the other wives are uneducated) that makes Bolanle different, but it is also the fact that of all the wives, Bolonle was the only one that Baba Segi deliberately chose to marry.  The other wives were either gifted to him or they gifted themselves.  She was also the youngest and the least competitive of the lot.  You would have thought that  these characteristics would make her Baba Segi's favorite wife, but it transpires that she is barren and since children is all that Baba Segi cares about he turns against her...not for long though for there is a secret waiting to be unearthed which turns the entire household on its head....

"The Secret Lives of Baba Segi's Wives" is a treat to read with a plot and storyline that will
alternately horrify, amuse, and bemuse its readers. But at the same time, its breezy tale urges a degree of compassion for the women of Nigeria as it is plain to see that even with economic opportunities on the rise women there are not always fully appreciated in that male-dominated society.

The novel is also is a startling but beautiful evocation of a Nigerian woman's inner world: of the little village girl whoso wanted to be literate; of the young woman filled with yearning to be loved by a young and handsome man and of the wife who comes to harbor a dangerous secret. But it is also a heartbreaking portrait of  the institution of marriage in Nigeria, especially the polygamous kind and the role women play as wives and co-wives. It also put under the magnifying glass this "obligation" to produce an heir, especially a male heir. A woman can be uneducated or ugly as sin and she will find a husband but if she's barren she may as well be a statue for no one has any need of her.

Lola Shoneyin is not just a writer to watch - she's a writer to follow.  You'll be saying the same thing once you read this fine novel.
Posted by Lotus Reads at 2:42 p.m.

That sounds like an excellent book - I'm going to wish-list it. Thanks for sharing your review.

Thank you for a wonderful review. I digress, but that bit about Nollywood made for interesting reading. Just one question here, you mentioned "a healthy belief in superstitions". Could you elaborate on that? Because belief in superstition itself implies something unhealthy, what would be a health belief. And sorry my Q is not related to the book itself.
Your review surely makes this sound like an intriguing book.
What made you pick it up, if I may ask?
How common is polygamy in Nigeria? Are there laws against it and//or laws that are on the books but not enforced?
I ask because they did pass anti-gay laws there recently.
I am glad to see such richly drawn, complex female characters.
Interesting that while being within the institution of polygamy Segi happened to be able to command Baba Segi's heart.
And what does "Iya" mean? Noticed that 3 of the wives had the name.
I wonder if the author also meant the wives to be metaphors of some sort for Nigerian society?
I assume this book is set in rural Nigeria?
I loved the way you presented the review making it intriguing and curious enough to know what secrets are at the heart of this story full of such wonderful characters!

Sorry those last lines should read as.. I loved the way you presented the review making it intriguing and curious enough to WANT to know what secrets are at the heart of this story full of such wonderful characters!

Thank-you for your great review, looks like a book I'll be looking to buy.
I am reading HONOLULU and like it a lot, I also have MOLOKA'I by the same author but haven't read it yet, I will soon, I like how Alan Brennert writes.
Have a wonderful Sunday Angelique :D

Beautifully written review. I haven't read Lola's books earlier but I might buy this one very soon !

Thank you Angelique for sharing this on FB.
eager to hear more about what you mean by 'healthy superstition'. perhaps you mean those thoughts that builds a lifestyle of routines, that however inapplicable they maybe for other societies, the framework actually help keeping hope for those who believe in it. while it might not sound right for other societies.

Great review of a fascinating book. Nigeria excels in bringing out wonderful books that allows us a glimpse of their world. You have captured the essence of the polygamous marriage and its effect on the four wives in the review. I would certainly seek this book out. There is the yearning of the young girl to be literate and the differing ambitions and characters of each wife. The 'gifted' wives is a new concept to me but the desperate hope to have the son and heir is something we Indians are familiar with.You've done a sterling job, Angie, as always.Thanks for helping us reach for books that are 'hidden'in this commercial rat race that is consuming the publishers.

Hi Laura! That's a good idea for you will really enjoy the read. BTW, I love your blog...I love the idea of amalgamating all your different interests.

Trust you to ask me questions that would have me giving the book and my review a more complete think-over! Yes, the expression, a "healthy belief in superstition" sounds like an oxymoron, doesn't it? It must really stick out because NJ asked me the same thing. I am not quite sure why I phrased it that way but I guess I was trying to explain that even while superstitions guide many Nigerian people the practice doesn't seem to cause them too many problems....perhaps because they treat it like a ritual rather than a belief from the heart? ALso, and it's something I forgot to mention in my review, despite some of the heavy topics that Shoneyin takes on in her novel her writing is humorous and lightly spun, so much so that when you read about these characters and their superstitions you don't take it seriously and you get the impression that they don't either.

Cannot answer your questions on marriage, polygamy and divorce Sanj because I haven't read up on any of it. I suspect that while it happens it is not common (I'm sure it's quite expensive to have to maintain these wives). Zuma recently got the world's attention when he took his third wife but then he's the President of South Africa and can afford it! ;)

Like you I was also happy to see such wonderful female characters...bravo to Shoneyin for that. Iya is a title given to a woman once she has a child and the name that follows is usually the name of her first born.

I would recommend this book not just because it's such a fabulous tale but also because it is a great Nigerian immersion.

Oh, yes, Alan Brennert, one of my favorite writers too! While I enjoyed both books, I think I enjoyed Moloka'i more. You will be so moved!

Go for it Booklover, you won't be disappointed!

NJ, beautifully put...really, I couldn't have expressed it any better. Also, although superstitious beliefs exist everywhere in Nigeria I don't know how seriously people take them? It's like how we will "knock on wood" in the west but we all know it's not going to do anything for us and yet, it's our way of acknowledging that perhaps there is a higher power looking out for us...keeps us a little humble wouldn't you say? :)

Thank you so much Leela...I found this to be a delightful read and I know you will too. You are right, there is some fabulous literature coming out of Nigeria and I feel lucky that with the internet and online booksellers we have access to these wonderful titles. I first heard of this book on the Cassava Republic Press website and although I had to wait a while for some of the online booksellers to stock it, it was well worth the wait!

Sanjay, the word 'Iya' means "Mother' in Yoruba, and Yoruba women are often referred to as 'Mother' of their first born child. So a woman whose first child is named Tolu would be known as 'Iya Tolu' and so on.

Hi Angelique :)
I am currently reading this book and thouroughly enjoying it.