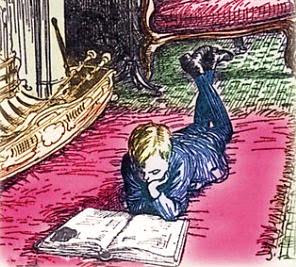 Kate S. has a very interesting childhood reading meme that I decided to try. This is what Kate had to say in her introduction:

"I’ve decided to have a go at creating a meme. I’ve been re-reading some childhood favourites lately and thinking a lot about the process of becoming a reader, so I’m taking early reading experiences as my subject."

1. How old were you when you learned to read and who taught you?

I was an early reader,I think I was three when I learned to identify a few easy words. I can't remember my mom actually sitting down and reading to or with me, but I do remember my grandmother reading to me over and over (she was the owner/principal of a little nursery school in Bombay so she was very keen on getting children to read, besides she had a great assortment of books in her school library!)

2. Did you own any books as a child? If so, what’s the first one that you remember owning? If not, do you recall any of the first titles that you borrowed from the library?

Gosh, I can't seem to remember my very early books but I do remember when I was about 7 or 8 my grandmother gave me a beautifully illustrated book called "Cultures of the World for Children" and I was so hooked on that book...I read it everyday and all the time. I realize now that it was that very book that sparked my interest in anthropology . Besides that book I also remember having various fairy tale books that I loved, "Hansel and Gretel", "The Little Matchgirl" and so on, but none have stayed in my memory as much as that book on cultures. I'd love to get my hands on that book again if I could.


3. What’s the first book that you bought with your own money?


Ahhh, this I remember well. We got Rs.5/month as pocket money (25c. at today's rate exchange maybe?) and I'd rush to the bookstore to pick up an Enid Blyton ( I was hooked on the St. Claire's and Mallory Towers series). Sometimes I'd buy the "Just William" books by Richmal Crompton or something from the "Famous Five" or "Secret Seven" series. Interestingly enough, when we visited India in August this year, I was able to find some of my old copies of the St. Claire's series and my 11-year old just loves them,except she wishes the pages weren't so yellow with age!

4. Were you a re-reader as a child? If so, which book did you re-read most often?

I don't remember being a re-reader. I was always impatient to finish a book so that I could start a new one. I guess I've carried this habit with me into adulthood because I very seldom re-read a book although I am often tempted to. Maybe I should impose a re-reading challenge on myself!

5. What’s the first adult book that captured your interest and how old were you when you read it?

Good question. I must have been all of 12 0r 13 when I started exploring my dad's collection of classics. I would just thumb through the pages initially, but slowly I started wanting to read more. Soon I was totally engrossed in Maugham's "Of Human Bondage" ( I still think it was one of my best reads ever) and high on the delight that Maugham's classic provided I attempted and enjoyed "Woman in White" by Henry Wilkes and a slightly abridged "Anna Karenina". My mom loved romance novels, so ofcourse, I had to peek into the books she left around...many were historical romances which intrigued me, but there were some Jackie Collins and Harold Robbins and although I wouldn't waste my time on those books anymore, I do think it contributed to making me a good speed reader because I had to finish that novel before my mom got home and caught me red-handed! :)

6. Are there children’s books that you passed by as a child that you have learned to love as an adult? Which ones?

Oh yes, plenty! Living in India as I did, I didn't have access to "Anne of Green Gables" or to Phillip Pullman's "Dark Materials" or EB White of "Charlotte's Web" fame. I discovered these books upon coming to Canada and I love them!

Hope you enjoyed the meme. If you would like to chart your early reading experiences, consider yourselves tagged!
Posted by Lotus Reads at 7:52 a.m.

I loved the Pullman series too! Thanks for sharing this meme.

oh, great meme lotus! i'm tempted to do it... let's see what i can dig up from my memory.

This was a great meme Lotus. It is nice to know what you were reading first as a child then a young adult. I have never heard of most of the books you mention accept Anne of Green Gables and Of Human Bondage. I remember reading them but I can't remember what books I read as a young child. I will have to give it some thought. :-)

Goodness... we DO have very similar tastes.. well with our childhood books at least! Have you realised that almost NO ONE in North America has even heard of Enid Blyton?? Shocking!!

je m'amuse You're quite welcome! And to think I only very recently discovered Phillip Pulman...but like they say, better late than never!

Beloved I don't blame you for not being familiar with many of the books I read as a child and young adult - as children in India we were mostly exposed to British authors...American authors,especially those writing for children, made a late entry into the Indian reading market.

nix Hi and welcome! True, I, too was under the impression that every child, the world over, had read Enid Blyton, how shocked I was to find out that she isn't so well known across the Atlantic and how shocked my Canadian friends are to find out I never read "Anne of Green Gables" as a child. :) Guess today's kids are a little more united in their reading tastes and it's largely due to our world having gone more global, no?

beenzzz Glad you liked the meme! I'm embarrassed to say I discovered "Charlotte's Web" only 3 years ago after my then 8-year old brought it home from her school library! :) She's read and enjoyed the Judy Blume books, too, but I haven't read any (yet!)

Wonderful meme! I think I'll pass this time around, though, since my recent Children's Book post touched on some of this.

Thanks so much for stopping by. I must pop over and read your children's book post - sounds good!

I love this meme! It reminds me of my Aunt buying me the book "Charlotte's Web." I didn't like the cover, so I didn't want to read it.

My mother literally said to me, not to judge a book by it's cover! I read the book and loved it so much and learned a valuable lesson in the process.

What a great meme, Lotus! It really got me thinking about the books I read as a child.

Anali I totally relate, I still have problems with books that do not possess an attractive cover...how shallow is that! ;)


ml Isn't it lovely to take a trip down memory lane every now and again?

I wish I could remember the first book I bought with my own money. I have no idea! I was a big library hound...

I love this! I have to respond!

1. How old were you when you learned to read and who taught you? My mother tells me I learned to read before grade school, but I thought I was learning to read when I was in grade one. I remember being taught to read the word "look", because the teacher wrote it on the board and told us it had two eyes in the middle.

2. Did you own any books as a child? We had a lot of books around the house, including my mom's childhood books like The Secret Garden, Lassie Come Home, Black Beauty and Grimm's Fairy Tales. We also had lots of books in an anthology series called Best in Children's Books that I think came by mail monthly. That's where I first saw illustrations by Maurice Sendak. But the earliest I remember were Make Way for Ducklings and Wanda Gag's Millions of Cats. (By the way, I had a childhood copy of Little Black Sambo!)

3. What’s the first book that you bought with your own money? When I was seven, I got The Lion, the Witch and the Wardrobe and The Magician's Nephew (which I had previously read from the library) at the Wilderton Shopping Centre in Montreal; 41 years later, I still have those two copies.

4. Which books did you re-read most often? The Narnia books, Little Women, Grimm's Fairy Tales, Albert Payson Terhune's books about collies, The Incredible Journey (two dogs and a cat battle the elements to rejoin their human family), the Chincoteague pony books and a series that had also been in my mom's home: My Bookhouse, collected by Olive Beaupre Miller, which had lots of great folk and fairy tales. Among many others...

5. What’s the first adult book that captured your interest and how old were you when you read it? I tried to read Moby Dick as a kid, but I think even I knew I was being pretentious and I never got past the first page. I was exposed to Shakespeare pretty young, and I didn't read much but I found it attractive. At about nine I read The Blue Castle (which turns out to be by L.M. Montgomery now that I look it up). It's about a disappointed-by-life 29-year-old and I remember thinking at the time that it was vaguely unsuitable for me. (Same with some paperbacks about The Saint and The Man From U.N.C.L.E. Definitely adult themes!) Like you, Lotus, as a young teenager, I read a lot of 19th-century novels from my dad's collection and enjoyed ploughing through them although I don't expect I really appreciated them. Dickens, Thackeray, Brontes, Eliott... those types. I should probably reread most of them.

6. Are there children’s books that you passed by as a child that you have learned to love as an adult? Although I owned them as a child, I didn't really appreciate Arthur Ransome's Swallows and Amazons books until I was an adult. And lots came out after I was grown-up, like the Phillip Pullman books and Harry Potter. I'm a total J.K. Rowling sucker now.

Sarah I'm absolutely thrilled you attempted the meme. It was wonderful to read your responses...The Secret Garden and Black Beauty were favorites of mine, too, but I didn't discover the Chronicles of Narnia until only a few years ago. I did try reading the first couple of volumes, but I think it might be easier for me to just go see the movie/s now! :)

Thank you so much for stopping by and do visit again!