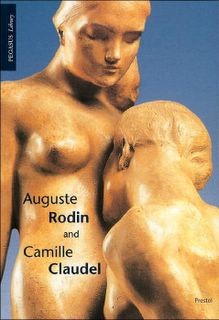 In order to study the artistic couple furthur I picked up JA Schmoll's book titled simply "Auguste Rodin and Camille Claudel". Schmoll, uses this book primarily to examine the relationship between Rodin and Claudel and what influence their romantic interaction might have had on their art while making sure that the information he imparts is historically accurate. While doing so he takes some of their most famous works of art and reveals how the sculptures were conceived and how the artists Rodin and Claudel executed them and what happened when they were complete. To me, that was the most fascinating part of the book because the story behind a work of art gives the viewer an intimate connection with it.

The scupture featured on the cover of Schmoll's book is titled "The Eternal Idol" and was created by Rodin in 1889. The erotic tension of this sculpture has made it one of Rodin's most celebrated "amorous" works. What is unusual about the sculpture is that although the woman is not an active participant of the love fest, her pose clearly signifies an expression of surrender---she is "allowing " all this to happen, but she is not totally involved. The man is unusal too in that, he does not attempt to embrace the woman, and yet, the position of his body indicates that he feels very close to her and his head is bent forward to place a kiss under her breast. The female figure in the sculpture has a certain sphinx-like quality. To the man kneeling before her, she seems as mysterious and enigmatic as Camille was to Rodin. It almost appears that the man is afraid to touch her with his hands for fear of breaking the spell or ruining the mirage.

A lot of Camille Claudel's work was also autobiographical. Take L'Age mur, for instance. Schmoll seems convinced that the sculpture is a symbolic embodiment of the menage a trois between Rodin, Camille and Rodin's mistress, Rose Beuret. In the sculpture the man's gait seems to be unsure, and although the upper part of his body is half-bent towards the younger woman (Camille was atleast 23 years younger than Rodin) who is on her knees in an imploring gesture, the man's trailing hand has already slipped out of her grasp. Spurned and left alone to moan, she will never be allowed to touch her lover again. The man is being led away by an older woman (Rose Beuret). This sculpture was created once Camille realized once and for all that Rodin was never going to give Rose Beuret up for her.

Schmoll, in his book, also tries to assess Camille's work but concludes "... it is difficult to arrive at a balanced judgment of her qualities as an artist because her biography and her involvement with Rodin constantly intrudes into the foreground. She is a fine marble sculptor no doubt, and several of her symbolist creations are indeed substantial works of art, but having lived in Rodin's shadow for so long, even when she made the break from him it was difficult for her to cast off the oppressive burden of his authority and he continued to inadvertently supply the basic template for her work as a sculptor..."

In other words, it's safe to say that Auguste Rodin would have arrived at greatness even if he had never encountered Camille Claudel---the real question is whether Camille would have become what she did without Rodin, who quite obviously fostered her gifts. Either way, at the height of their entanglement they produced delirious works of sexual passion---Rodin's "I am Beautiful" which feature a pair of acrobatic lovers and Camille's "The Waltz" are representative of that.

And no book about Rodin and Claudel would be complete without mentioning Camille's mental difficulties. Camille's behavior became increasingly bizarre as time went on and it became apparent that she was heading for a nervous breakdown of some kind. In 1893, she moved out of Rodin's studio and although he tried very hard to win her back, she reacted to his efforts with increasing coldness and touchiness. in 1898 she broke off the relationship altogether and worked for a while on her own. From 1907 onwards, Camille's creative powers deserted her completely. Barricading herself in her apartment, which soon fell into a state of sordid neglect, she only went out at night. In 1913 she was forcibly evicted and taken to a mental asylum where she died in 1943, 26 years after Rodin passed away.